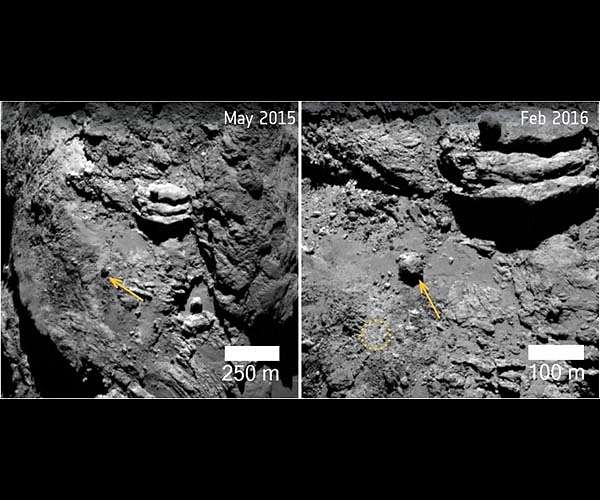 Today, ESA and the Zooniverse launch Rosetta Zoo, a citizen science project that invites volunteers to engage in a cosmic game of ‘spot the difference’. By browsing through pictures collected by ESA’s Rosetta mission, you can help scientists figure out how a comet’s surface evolves as it swings around the Sun.

Rosetta spent over two years orbiting Comet 67P/Churyumov-Gerasimenko between 2014 and 2016. The spacecraft studied the comet up close, collecting unprecedented data to unlock some of the most intriguing mysteries surrounding the formation and evolution of our Solar System. Partway through Rosetta’s studies, the comet approached the Sun – a moment known as ‘perihelion’. Following its closest approach of about 186 million km from our star, the comet then moved away again. This meant that its surface was illuminated in different ways during the course of Rosetta’s mission.

Rosetta witnessed many landscape changes on Comet 67P: from the impressive fall of cliffs and the formation of pits, to evolving dust patterns and rolling boulders. Scientists are interested in using these changes to investigate the detailed mechanism through which a comet sheds its outer layers, as sunlight heats the ice and dust surrounding the nucleus.

The sheer number of surface changes, however, makes charting them a highly complex task. So scientists are looking for your help.

Vast amounts of data need a vast number of eyes

“The Rosetta archive, which is openly accessible to scientists and the public, contains a vast amount of data collected by this extraordinary mission that have only been partially explored,” says Bruno Merin, head of ESA’s ESAC Science Data Centre near Madrid, Spain.

“In the past few years, astrophotographers and space enthusiasts have spontaneously identified changes and signs of activity in Rosetta’s images. Except for a few cases, though, it has not been possible to link any of these events to surface changes, mostly due to the lack of human eyes sifting through the whole dataset. We definitely need more eyes!”

This is why ESA partnered with the Zooniverse, the world’s largest and most popular platform for people-powered research. The new Rosetta Zoo project presents a particular set of data: pairs of images collected by Rosetta’s OSIRIS camera showing Comet 67P’s surface before and after perihelion.

Volunteers are invited to view images of roughly the same region side by side and identify a variety of changes, from large-scale dust transport to comet chunks that moved or even vanished. Sometimes this may require zooming in or out a few times, or rotating the images to spot changes on different scales, getting up close and personal with the iconic comet.

“Given the complexity of the imagery, the human eye is much better at detecting small changes between images than automated algorithms are,” explains Sandor Kruk, a postdoctoral researcher at the Max Planck Institute for Extraterrestrial Physics near Munich, Germany, who first conceived and initiated the project during his ESA research fellowship a couple of years ago.

“The OSIRIS images have been publicly available in the archives for some time, but many images have not been analysed yet for changes in the surface of the comet. That is why we decided to set up this citizen science project and ask volunteers to inspect Rosetta images of 67P. Given the excitement Rosetta generated during its mission, we hope this project will be joined by many members of the public to help scientists analyse the data it generated.”

Your responses will improve our understanding of the Solar System

Thanks to the visual inspection of many volunteers, the project will produce maps of changes and active areas on the comet’s surface, with labels for each type of change. Scientists will then be able to associate the activity of the comet with modifications on its surface, developing new models to link the physics of comet activity to observed changes such as lifted boulders or collapsed cliffs.

By digging through Rosetta’s images and playing a cosmic game of ‘spot the difference’, you will help us reach new heights in our understanding of comets and the Solar System as a whole. But the benefits go both ways: we hope that by opening up this data to the public, we are improving the openness of our work, increasing citizen engagement in scientific research, and building stronger connections between science and society.

Anybody can use Rosetta Zoo online for free, without needing to sign up, install an app or programme, or have any previous scientific experience. Spot the differences between as many or as few image pairs as you have time for – whether that’s five minutes whilst waiting for the bus, or regular evenings of cometary exploration.

“What does a primitive comet look like? No one knows, but with the help of volunteers we can characterise how comets evolve now and understand the physics driving those changes: then we will be able to rewind the movie of cometary evolution all the way back to the origin of the Solar System,” comments planetary scientist Jean-Baptiste Vincent from the DLR Institute of Planetary Research in Berlin, Germany. 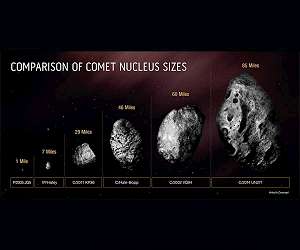 
NASA’s Hubble Space Telescope has determined the size of the largest icy comet nucleus ever seen by astronomers. The estimated diameter is approximately 80 miles across, making it larger than the state of Rhode Island. The nucleus is about 50 times larger than found at the heart of most known comets. Its mass is estimated to be a staggering 500 trillion tons, a hundred thousand times greater than the mass of a typical comet found much closer to the Sun.