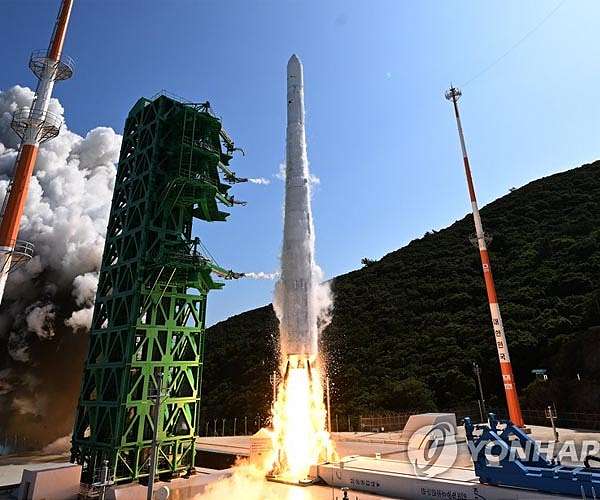 South Korea said Tuesday it had successfully launched its homegrown space rocket and placed a payload into orbit in a “giant leap” for the country’s quest to become an advanced space-faring nation.

The Korea Satellite Launch Vehicle II, nicknamed Nuri and emblazoned with the South Korean flag, lifted off at 4:00pm (0700 GMT) from the launch site in Goheung on the southern coast, trailing a column of flame.

All three stages of the rocket worked, taking it to its target altitude of 700 kilometres (430 miles), and it successfully separated a performance verification satellite and put it into orbit, Seoul said.

“South Korea has now become the seventh nation in the world to launch a space vehicle with homegrown technology,” he said, adding the government would continue its quest to become “an advanced space-faring nation”.

In the first test last October, all three stages of the rocket worked with the vehicle reaching an altitude of 700 kilometres, and the 1.5-tonne payload separating successfully.

But it failed to put a dummy satellite into orbit after the third-stage engine stopped burning earlier than scheduled.

The three-stage Nuri rocket has been a decade in development at a cost of 2 trillion won ($1.5 billion).

In Asia, China, Japan and India all have advanced space programmes, and the South’s nuclear-armed neighbour North Korea was the most recent entrant to the club of countries with their own satellite launch capability.

Ballistic missiles and space rockets use similar technology and Pyongyang put a 300-kilogram (660-pound) satellite into orbit in 2012 in what Washington condemned as a disguised missile test.

South Korea becomes the seventh nation — not including North Korea — to have successfully launched a one-tonne payload on their own rockets.

The South Korean space programme has a mixed record — its first two launches in 2009 and 2010, which in part used Russian technology, both ended in failure.

The second one exploded two minutes into the flight, with Seoul and Moscow blaming each other.

Eventually a 2013 launch succeeded, but still relied on a Russian-developed engine for its first stage.

“The fact that we now have our own space rocket means we will be able to test and verify technologies needed for space exploration projects down the road,” Bang Hyo-choong, professor of aerospace engineering at KAIST, told the Yonhap News Agency.

The satellite launch business is increasingly the preserve of private companies, notably Elon Musk’s SpaceX, whose clients include the US space agency NASA and the South Korean military.

The Tuesday test looks set to bring South Korea closer to achieving its space ambitions, including a plan to land a probe on the Moon by 2030.