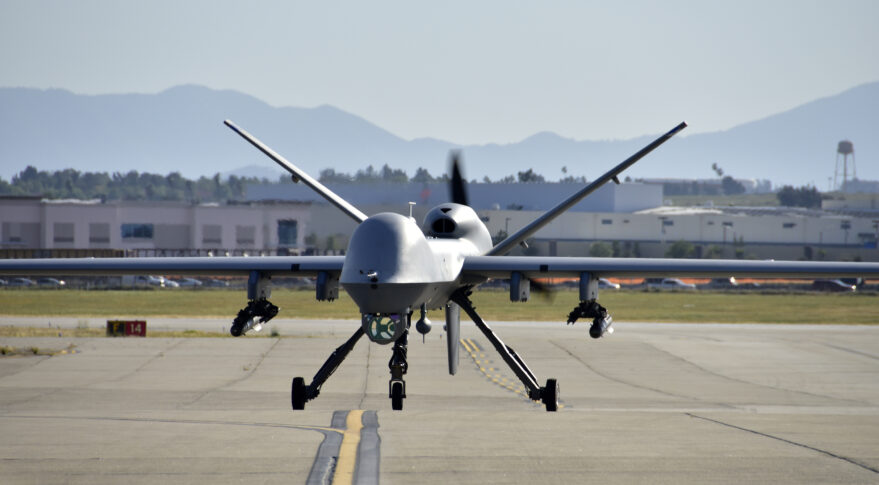 WASHINGTON — SES and Hughes in a demonstration last month installed satellite internet service on a General Atomics surveillance drone that the company sells to the U.S. military and allies.

The companies announced Nov. 10 that the MQ-9B SkyGuardian remotely piloted aircraft successfully communicated with SES satellites in medium and geostationary Earth orbits. The drone stayed on the ground and did not fly, but the companies said the demonstration showed how the military could use high-throughput satellite connectivity to transmit live-video streams faster and more reliably than traditional single-orbit networks.

“As we expand into new and more intricate payloads for our RPA, we’ll require higher data rates that provide the bandwidth, security and robustness to operate our sensors,” said Fred Darlington, senior vice president of General Atomics Aeronautical Systems.

“This is the first time this multi-orbit capability was integrated onto the MQ-9 platform,” said Will Tong, SES vice president of strategic government initiatives.

SES operates a network of satellites in both medium and GEO orbits. Hughes Network Systems provided a software-defined modem and network management software to enable roaming across satellites.

Tong said one of the challenges of connecting aircraft to satellites is the size and weight of the terminals. In this demonstration SES used a small terminal that delivered throughput of over 15 megabits per second.

“Right now remotely piloted aircraft have low data rate L band as their secondary satcom link and that cannot carry the amount of data that is needed to bring critical data from the RPA to the ground,” he said. The Hughes modem, he said, switches the satcom link nearly instantaneously, which does not happen now. “If an RPA operator wants to switch links for any type of interference or jamming, it needs to be done manually and that takes time.”

Some armed versions of the MQ-9s drop missiles on targets, but most conduct 24/7 reconnaissance over areas of interest. Its cameras transmit live video to intelligence units or command centers hundreds or thousands of miles away.

Technologies available today allow the military to get more data from RPAs without having to weigh the aircraft down with heavy equipment, Tong said. “Integrating a small form factor antenna — about a third of the size of the current antenna — while showing over four-times more throughout than current capabilities opens the realm of the possible,” he said.

RPAs currently have limited connectivity of anywhere from 2 to 10 megabits per second, depending on their antennas, said Tong. And they suffer from a lack of resilience from losing a satellite link. This limits how much data can be transmitted and how fast, he said, particularly high-resolution images and video.