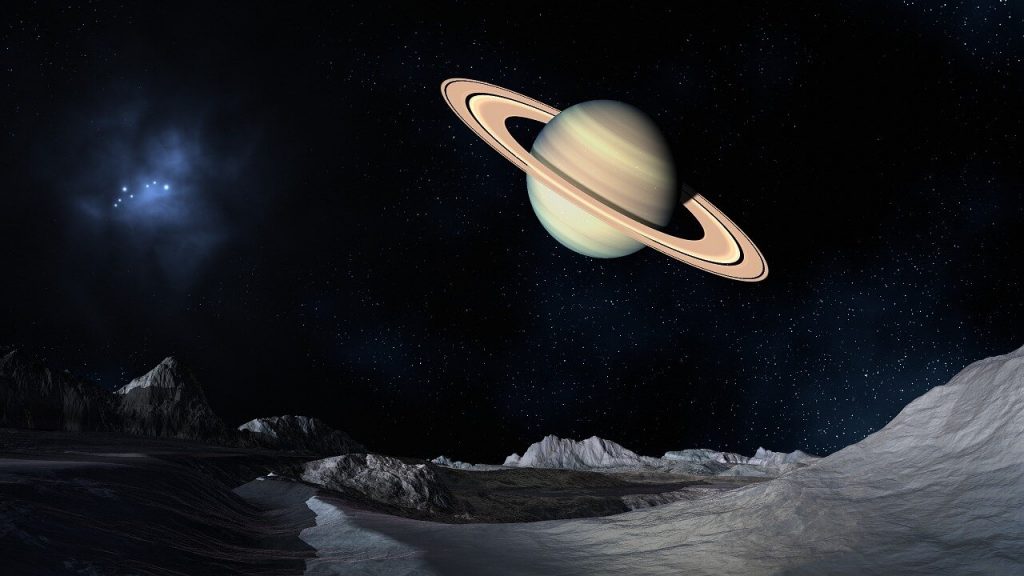 Swirling around the planet’s equator, the rings of Saturn are a dead giveaway that the planet is spinning at a tilt. The belted giant rotates at a 26.7-degree angle relative to the plane in which it orbits the sun. Astronomers have long suspected that this tilt comes from gravitational interactions with its neighbor Neptune, as Saturn’s tilt precesses, like a spinning top, at nearly the same rate as the orbit of Neptune.

But a new modeling study by astronomers at MIT and elsewhere has found that, while the two planets may have once been in sync, Saturn has since escaped Neptune’s pull. What was responsible for this planetary realignment? The team has one meticulously tested hypothesis: a missing moon.

In a study appearing in Science, the team proposes that Saturn, which today hosts 83 moons, once harbored at least one more, an extra satellite that they name Chrysalis. Together with its siblings, the researchers suggest, Chrysalis orbited Saturn for several billion years, pulling and tugging on the planet in a way that kept its tilt, or “obliquity,” in resonance with Neptune.

But around 160 million years ago, the team estimates, Chrysalis became unstable and came too close to its planet in a grazing encounter that pulled the satellite apart. The loss of the moon was enough to remove Saturn from Neptune’s grasp and leave it with the present-day tilt.

What’s more, the researchers surmise, while most of Chrysalis’ shattered body may have made impact with Saturn, a fraction of its fragments could have remained suspended in orbit, eventually breaking into small icy chunks to form the planet’s signature rings.

The missing satellite, therefore, could explain two longstanding mysteries: Saturn’s present-day tilt and the age of its rings, which were previously estimated to be about 100 million years old—much younger than the planet itself.

“Just like a butterfly’s chrysalis, this satellite was long dormant and suddenly became active, and the rings emerged,” says Jack Wisdom, professor of planetary sciences at MIT and lead author of the new study.

A moment of progress

In the early 2000s, scientists put forward the idea that Saturn’s tilted axis is a result of the planet being trapped in a resonance, or gravitational association, with Neptune. But observations taken by NASA’s Cassini spacecraft, which orbited Saturn from 2004 to 2017, put a new twist on the problem. Scientists found that Titan, Saturn’s largest satellite, was migrating away from Saturn at a faster clip than expected, at a rate of about 11 centimeters per year. Titan’s fast migration, and its gravitational pull, led scientists to conclude that the moon was likely responsible for tilting and keeping Saturn in resonance with Neptune.

But this explanation hinges on one major unknown: Saturn’s moment of inertia, which is how mass is distributed in the planet’s interior. Saturn’s tilt could behave differently, depending on whether matter is more concentrated at its core or toward the surface.

“To make progress on the problem, we had to determine the moment of inertia of Saturn,” Wisdom says.

In their new study, Wisdom and his colleagues looked to pin down Saturn’s moment of inertia using some of the last observations taken by Cassini in its “Grand Finale,” a phase of the mission during which the spacecraft made an extremely close approach to precisely map the gravitational field around the entire planet. The gravitational field can be used to determine the distribution of mass in the planet.

Wisdom and his colleagues modeled the interior of Saturn and identified a distribution of mass that matched the gravitational field that Cassini observed. Surprisingly, they found that this newly identified moment of inertia placed Saturn close to, but just outside the resonance with Neptune. The planets may have once been in sync, but are no longer.

“Then we went hunting for ways of getting Saturn out of Neptune’s resonance,” Wisdom says.

The team first carried out simulations to evolve the orbital dynamics of Saturn and its moons backward in time, to see whether any natural instabilities among the existing satellites could have influenced the planet’s tilt. This search came up empty.

So, the researchers reexamined the mathematical equations that describe a planet’s precession, which is how a planet’s axis of rotation changes over time. One term in this equation has contributions from all the satellites. The team reasoned that if one satellite were removed from this sum, it could affect the planet’s precession.

The question was, how massive would that satellite have to be, and what dynamics would it have to undergo to take Saturn out of Neptune’s resonance?

Wisdom and his colleagues ran simulations to determine the properties of a satellite, such as its mass and orbital radius, and the orbital dynamics that would be required to knock Saturn out of the resonance.

They conclude that Saturn’s present tilt is the result of the resonance with Neptune and that the loss of the satellite, Chrysalis, which was about the size of Iapetus, Saturn’s third-largest moon, allowed it to escape the resonance.

Sometime between 200 and 100 million years ago, Chrysalis entered a chaotic orbital zone, experienced a number of close encounters with Iapetus and Titan, and eventually came too close to Saturn, in a grazing encounter that ripped the satellite to bits, leaving a small fraction to circle the planet as a debris-strewn ring.

The loss of Chrysalis, they found, explains Saturn’s precession, and its present-day tilt, as well as the late formation of its rings.

“It’s a pretty good story, but like any other result, it will have to be examined by others,” Wisdom says. “But it seems that this lost satellite was just a chrysalis, waiting to have its instability.”

Which planet has the most moons? Moons of Saturn, Venus and Jupiter explained

Provided by
Massachusetts Institute of Technology

Citation:
Saturn’s rings and tilt could be the product of an ancient, missing moon (2022, September 15)
retrieved 16 September 2022
from https://phys.org/news/2022-09-saturn-tilt-product-ancient-moon.html
This document is subject to copyright. Apart from any fair dealing for the purpose of private study or research, no
part may be reproduced without the written permission. The content is provided for information purposes only.