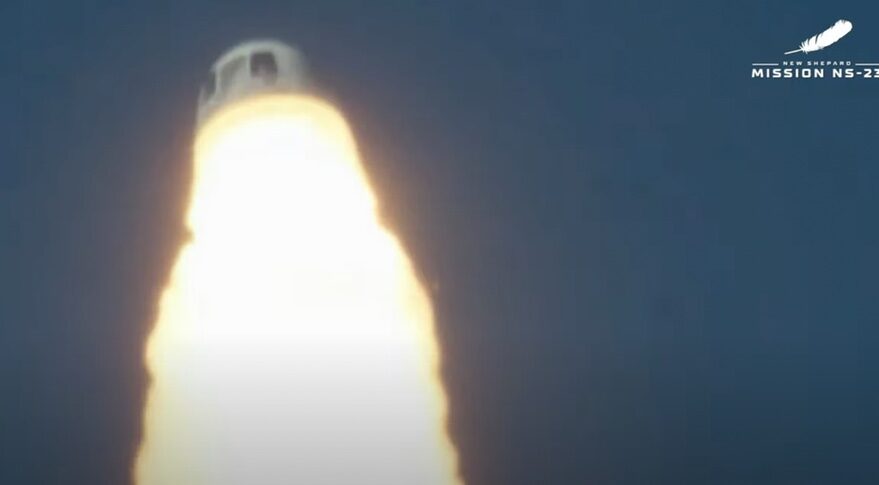 PARIS — A problem with Blue Origin’s New Shepard suborbital vehicle caused an in-flight flight a minute after liftoff Sept. 12, causing a capsule filled with payloads but not people to fire its launch abort motor and parachute to a safe landing.

New Shepard lifted off on the NS-23 mission at 10:27 a.m. Eastern from Blue Origin’s Launch Site One in West Texas. The mission, postponed from the end of August because of bad weather at the launch site, had its liftoff delayed by nearly an hour, although the company did not disclose the reason for the holds during the countdown.

The launch appeared to be going normally until about T+1 minutes. The plume from the BE-3 engine that powers the vehicle’s booster changed appearance, and the vehicle then appeared to veer slightly from the vertical. At T+1:05, the capsule’s launch escape motor activated, sending the capsule clear of the booster.

The capsule reached a peak altitude of about 11.4 kilometers, then descended, deploying drogue and main parachutes as it would on a normal mission. The capsule touched down near the launch site about five and a half minutes after liftoff.

“It appears that we have experienced an anomaly on today’s flight. This wasn’t planned and we have no details yet,” Blue Origin’s Erika Wagner said on the launch webcast shortly after the abort motor fired. The company did not disclose other information about the problem, or the fate of the booster, which was presumed to have been destroyed.

NS-23 was the first uncrewed New Shepard mission in more than a year and uses a different capsule and booster from the flights that carry people. This vehicle was making its ninth flight, having been used for other payload flights and tests of the overall New Shepard system.

The NS-23 mission had three dozen payloads on board, half of which were experiments sponsored by NASA through its Flight Opportunities program for suborbital research on commercial vehicles. Other payloads included thousands of postcards from students from Club for the Future, a nonprofit associated with Blue Origin.