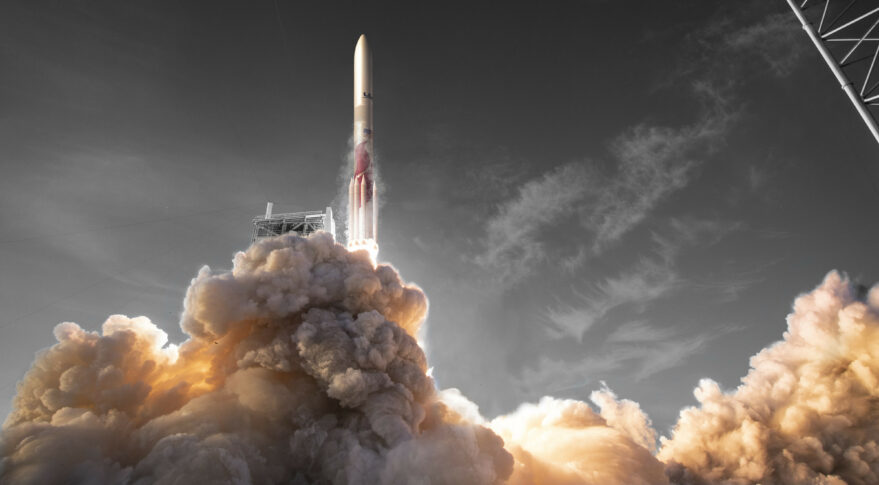 PARIS — Several new launch vehicles, some years behind their original schedules, are now expected to make their inaugural launches within the next year.

During a panel at World Satellite Business Week here Sept. 12, executives of several launch providers said they were entering the home stretch of development of their next-generation launch vehicles, in some cases as their existing vehicles near retirement.

Mark Peller, vice president of major development at United Launch Alliance, said the company was still preparing for a first launch of its Vulcan Centaur before the end of the year despite widespread industry skepticism that either the rocket or its payload will be ready in time.

“We’re coming down to the wire” on development of Vulcan, he said. “We have a handful of system tests to run through and we have a plan to be ready to fly before the end of the year.”

A key factor in that plan is the status of the BE-4 engines for the rocket’s first stage. Those engines are being tested at Blue Origin’s West Texas facility and will be delivered to the ULA factory in Decatur, Alabama, “in the coming weeks” to be installed on the rocket, Peller said. “Once we get those engines, we’ll get that rocket out the door and down to the launch site, where we’ll do some final system-level testing before we’re ready to fly.”

That readiness to fly will also depend on the status of the payload, Astrobotic’s Peregrine lunar lander. “We are planning for a mission at the end of this year,” said Dan Hendrickson, vice president of business development at Astrobotic, at an Aug. 24 meeting of the Lunar Exploration Analysis Group.

However, he declined then to say when the completed lander would need to be delivered to Cape Canaveral to support that, assuming the rocket is ready. “We are actively executing towards that schedule right now.”

“We need to make sure that launch vehicle plan is aligned with our spacecraft customer’s plans, so we’re working that right now,” Peller said. “We’ll be narrowing down on a launch date very soon.”

The Japanese space agency JAXA, meanwhile, is preparing to perform the first launch of the H3 rocket before the current Japanese fiscal year ends next March. Work on that vehicle has been delayed by problems with the turbopump of the LE-9 engine for its first stage.

Iwao Igarashi, vice president and general manager at Mitsubishi Heavy Industries, said that engineers have solved the turbine vibration problem that plagued the engine, confirming the solution in a series of tests in August. Up next is a static-fire test of the H3 at the launch site, scheduled for November. “After the success of that test, we will announce the date of the maiden flight,” he said.

Stéphane Israël, chief executive of Arianespace, said the company is preparing to retire the Ariane 5 as soon as next April. With the launch of Eutelsat’s Konnect VHTS Sept. 7, only three more Ariane 5 launches remain, two carrying communications satellites and the third the Jupiter Icy Moons Explorer (JUICE) mission for the European Space Agency.

“We would like to end Ariane 5 operations with JUICE in April of next year,” he said. “Then Ariane 6 is coming.”

Israël declined to provide details on the status of Ariane 6 testing and plans for a first launch, which like Vulcan and H3, has slipped from 2020. ESA and other Ariane 6 partners will provide an update later in the month on the status of its development later this month, he said.

Jarrett Jones, senior vice president of New Glenn at Blue Origin, also held off on committing to a launch date for the first orbital flight of this company’s rocket, emphasizing the progress the company was making on vehicle development and testing as well as production of flight hardware.

Tom Ochinero, vice president of commercial sales at SpaceX, said the first orbital flight of the company’s Starship reusable launch vehicle will take place within the next year. “Some time in the next year or so we should be orbital with Starship,” he said. That aligns with a tweet from Elon Musk, SpaceX chief executive, Aug. 2 where he predicted the first “successful” orbital Starship mission in the next 1 to 12 months.

The introduction of Starship comes as SpaceX increases the flight rate of its Falcon 9. “We’re trying to get to a little over 60 launches this year,” he said. “Next year we’re trying to beat that record and try to do 100 launches.” That schedule includes six launches in the next 12 months of its Falcon Heavy, which last flew in mid-2019.

Ochinero said that SpaceX plans to fly Falcon and Starship in parallel for some time, with the potential for each vehicle to back up the other, at least for some missions. “We’ll continue to fly both and let the market decide which vehicle they want to fly on,” he said.