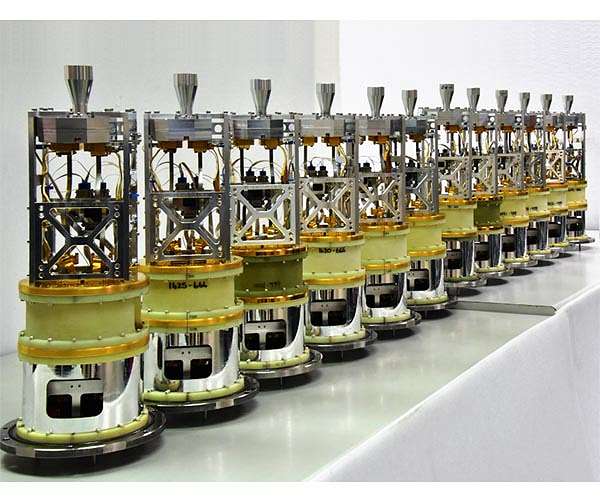 A new set of receivers installed on antennas at the Atacama Large Millimeter/submillimeter Array (ALMA) have achieved first light. With it, they set a new record for the longest wavelengths visible with the radio array. The achievement has opened a window on the Universe previously inaccessible at the telescope, thanks to an international team of engineers, including engineers from the National Radio Astronomy Observatory (NRAO).

Scientists achieved first light with the Band 1 receiver on August 14, 2021, with successful observations of the edge of the Moon, followed by the first successful interferometry test observations using two Band 1 receivers on August 17, and acquisition of the first radio spectrum on August 27. During the tests, scientists observed and successfully received signals from multiple celestial objects, including Solar System planets Venus and Mars, Orion KL-a cluster of stars within a molecular cloud, VY Canis Majoris-a red hypergiant variable pulsating star, and quasar 3C 279.

ALMA observes the Universe over a wide range of radio wavelengths within the millimeter and submillimeter range of the electromagnetic spectrum with the help of specialized receivers. ALMA’s 66 antennas were previously equipped with eight different receivers, operating at wavelengths from 3.6mm (ALMA Band 3) to 0.3mm (ALMA Band 10). These new Band 1 receivers are sensitive to radio waves between 6 and 8.5mm in length, expanding the capability of the antennas to “see” more wavelengths of light from distant cosmic sources.

“This new band will help scientists to understand better how disks of dust that we see around many young stars grow into planets. It will also give us much more detailed images of hot plasma in galaxy clusters and around quasars, and help us to detect distant, dust-obscured galaxies that are as yet unknown,” said Brian Mason, NRAO Staff Scientist. “ALMA’s location in the southern hemisphere, combined with its large number of antennas and these new receivers, will enable unprecedented centimeter-wavelength views of celestial objects in our own galaxy and beyond.”

The wavelength sensitivity of a radio astronomy receiver is only as good as the components it is made from. Two of the most critical components of Band 1, the low noise amplifiers (LNAs) and the local oscillators (LOs), were built at the NRAO’s Central Development Laboratory (CDL).

“LNAs play a key role in maximizing the sensitivity of receivers on ALMA and any other radio astronomy receivers and LOs allow it to be tuned,” said Bert Hawkins, Director of CDL. “Design and production of these two critical subsystems require highly specialized knowledge and skills. That’s where CDL comes in.”

Low noise amplifiers are the active component closest to the antenna in a radio astronomy receiver, and as a result, play a critical role in their operation. “The role of low noise amplifiers is to set the noise performance of the overall receiver, so it is an important piece of the system,” said Hawkins. “To do this, it has to add very little noise to the system, have high gain, and have an adequate dynamic range over the wavelengths being observed, and doing this is a specialty of our LNA team at CDL.”

Local oscillators produce signals that, when combined with amplified signals from space, convert the signals down to lower frequencies. “The best way to understand a local oscillator is that it allows us to take signals from space, which are embedded with scientifically useful information but are at frequencies too high to further process, and convert them down to frequencies where we can filter, digitize, and process to form an image without corrupting the useful scientific information within,” said Hawkins.

“The art of building a good local oscillator is to create a device that produces a strong, noise-free, tunable signal-yet another specialty of CDL. In fact, we have built all the LOs for ALMA.”

The development of Band 1 was led by Taiwan’s Academic Sinica Institute of Astronomy and Astrophysics (ASIAA), with support of an international team comprised of NRAO, the National Astronomical Observatory of Japan (NAOJ), the Herzberg Institute of Astrophysics in Canada, the National Chung-Shan Institute of Science and Technology (NCSIST) in Taiwan, and the University of Chile. The University of Chile assisted with developing and producing optical elements for the Band 1 receivers, including lenses and horn antennas.

Previously, CDL developed ALMA’s Band 6 receivers, which are sensitive to radio waves between 1.1 and 1.4mm in length (frequencies between 211 to 275 GHz). Band 6 is one of the most scientifically productive receivers used on ALMA.