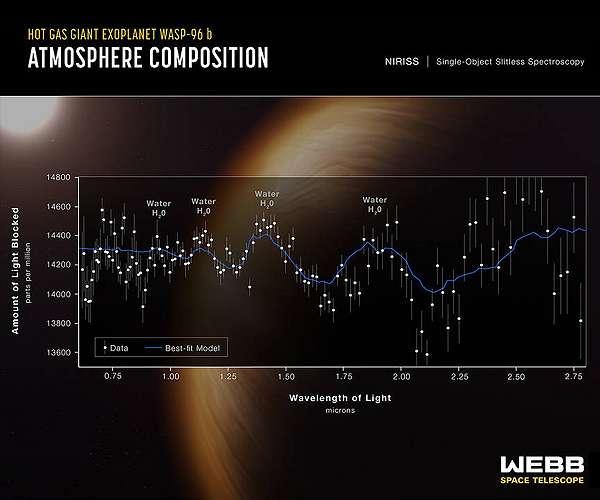 NASA’s James Webb Space Telescope has captured the distinct signature of water, along with evidence for clouds and haze, in the atmosphere surrounding a hot, puffy gas giant planet orbiting a distant Sun-like star.

The observation, which reveals the presence of specific gas molecules based on tiny decreases in the brightness of precise colors of light, is the most detailed of its kind to date, demonstrating Webb’s unprecedented ability to analyze atmospheres hundreds of light-years away.

While the Hubble Space Telescope has analyzed numerous exoplanet atmospheres over the past two decades, capturing the first clear detection of water in 2013, Webb’s immediate and more detailed observation marks a giant leap forward in the quest to characterize potentially habitable planets beyond Earth.

WASP-96 b is one of more than 5,000 confirmed exoplanets in the Milky Way. Located roughly 1,150 light-years away in the southern-sky constellation Phoenix, it represents a type of gas giant that has no direct analog in our solar system. With a mass less than half that of Jupiter and a diameter 1.2 times greater, WASP-96 b is much puffier than any planet orbiting our Sun. And with a temperature greater than 1000F, it is significantly hotter. WASP-96 b orbits extremely close to its Sun-like star, just one-ninth of the distance between Mercury and the Sun, completing one circuit every 3.5 Earth-days.

The combination of large size, short orbital period, puffy atmosphere, and lack of contaminating light from objects nearby in the sky makes WASP-96 b an ideal target for atmospheric observations.

On June 21, Webb’s Near-Infrared Imager and Slitless Spectrograph (NIRISS) measured light from the WASP-96 system for 6.4 hours as the planet moved across the star. The result is a light curve showing the overall dimming of starlight during the transit, and a transmission spectrum revealing the brightness change of individual wavelengths of infrared light between 0.6 and 2.8 microns.

While the light curve confirms properties of the planet that had already been determined from other observations – the existence, size, and orbit of the planet – the transmission spectrum reveals previously hidden details of the atmosphere: the unambiguous signature of water, indications of haze, and evidence of clouds that were thought not to exist based on prior observations.

A transmission spectrum is made by comparing starlight filtered through a planet’s atmosphere as it moves across the star to the unfiltered starlight detected when the planet is beside the star. Researchers are able to detect and measure the abundances of key gases in a planet’s atmosphere based on the absorption pattern – the locations and heights of peaks on the graph. In the same way that people have distinctive fingerprints and DNA sequences, atoms and molecules have characteristic patterns of wavelengths that they absorb.

The spectrum of WASP-96 b captured by NIRISS is not only the most detailed near-infrared transmission spectrum of an exoplanet atmosphere captured to date, but it also covers a remarkably wide range of wavelengths, including visible red light and a portion of the spectrum that has not previously been accessible from other telescopes (wavelengths longer than 1.6 microns). This part of the spectrum is particularly sensitive to water as well as other key molecules like oxygen, methane, and carbon dioxide, which are not immediately obvious in the WASP-96 b spectrum but which should be detectable in other exoplanets planned for observation by Webb.

Researchers will be able to use the spectrum to measure the amount of water vapor in the atmosphere, constrain the abundance of various elements like carbon and oxygen, and estimate the temperature of the atmosphere with depth. They can then use this information to make inferences about the overall make-up of the planet, as well as how, when, and where it formed. The blue line on the graph is a best-fit model that takes into account the data, the known properties of WASP-96 b and its star (e.g., size, mass, temperature), and assumed characteristics of the atmosphere.

The exceptional detail and clarity of these measurements is possible because of Webb’s state-of-the-art design. Its 270-square-foot gold-coated mirror collects infrared light efficiently. Its precision spectrographs spread light out into rainbows of thousands of infrared colors. And its sensitive infrared detectors measure extremely subtle differences in brightness. NIRISS is able to detect color differences of only about one thousandth of a micron (the difference between green and yellow is about 50 microns), and differences in the brightness between those colors of a few hundred parts per million.

In addition, Webb’s extreme stability and its orbital location around Lagrange Point 2 roughly a million miles away from the contaminating effects of Earth’s atmosphere makes for an uninterrupted view and clean data that can be analyzed relatively quickly.

The extraordinarily detailed spectrum – made by simultaneously analyzing 280 individual spectra captured over the observation – provides just a hint of what Webb has in store for exoplanet research. Over the coming year, researchers will use spectroscopy to analyze the surfaces and atmospheres of several dozen exoplanets, from small rocky planets to gas- and ice-rich giants. Nearly one-quarter of Webb’s Cycle 1 observation time is allocated to studying exoplanets and the materials that form them.

This NIRISS observation demonstrates that Webb has the power to characterize the atmospheres of exoplanets-including those of potentially habitable planets-in exquisite detail. 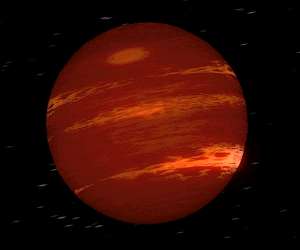 NASA Helps Decipher How Some Distant Planets Have Clouds of Sand

Most clouds on Earth are made of water, but beyond our planet they come in many chemical varieties. The top of Jupiter’s atmosphere, for example, is blanketed in yellow-hued clouds made of ammonia and ammonium hydrosulfide. And on worlds outside our solar system, there are clouds composed of silicates, the family of rock-forming minerals that ma … read more