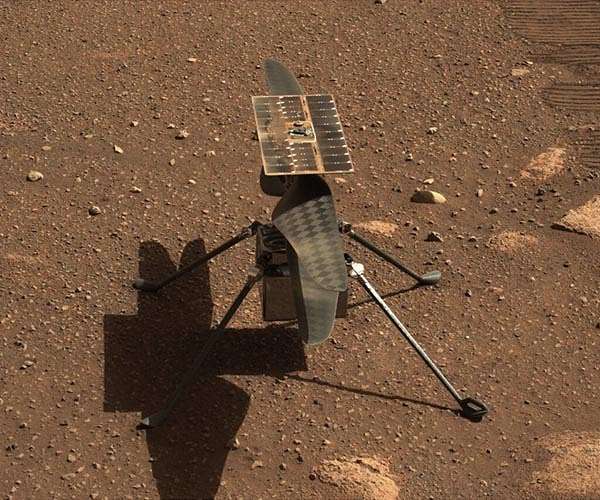 On Thursday, May 5, mission controllers at NASA’s Jet Propulsion Laboratory received confirmation that the agency’s Ingenuity Mars Helicopter had re-established communications with the Perseverance rover. Earlier in the week, the rotorcraft had missed a planned communications session with the rover – for the first time in over a year of operations on the Mars surface. Ingenuity relies on Perseverance as the base station that enables it to send data to and receive commands from Earth. While more data downlinks and analysis are needed, the Ingenuity and Perseverance teams believe they have determined a cause of the anomaly as well as a plan to return to normal operations.

Ingenuity became the first powered aircraft to operate on another world on April 19, 2021. Designed to perform up to five experimental test flights over a span of 30 Martian days (sols), or close to 31 Earth days, the rotorcraft has flown over 4.2 miles (6.9 kilometers) across 28 sorties and operated from the surface of the Red Planet for over a year.

Data downlinked indicates that the communications dropout on May 3, Sol 427 of the Perseverance rover’s mission at Mars, was a result of the solar-powered helicopter entering a low-power state, potentially due to the seasonal increase in the amount of dust in the Martian atmosphere and lower temperatures as winter approaches. The dust diminishes the amount of sunlight hitting the solar array, reducing Ingenuity’s ability to recharge its six lithium-ion batteries. When the battery pack’s state of charge dropped below a lower limit, the helicopter’s field-programmable gate array (FPGA) was powered down.

The FPGA manages Ingenuity’s operational state, switching the other avionics elements on and off as needed to maximize power conservation. It also operates the heaters that enable the helicopter to survive frigid Martian nights, maintains precise spacecraft time, and controls when the helicopter is scheduled to wake up for communications sessions with Perseverance.

When the FPGA lost power during the Martian night, the helicopter’s onboard clock – which designates the time that communications with Perseverance occur – reset. And Ingenuity’s heaters, so vital to keeping electronics and other components within operational temperatures – turned off. When the Sun rose the next morning and the solar array began to charge the batteries, the helicopter’s clock was no longer in sync with the clock aboard the rover. Essentially, when Ingenuity thought it was time to contact Perseverance, the rover’s base station wasn’t listening.

To make sure Perseverance would hear a call, Perseverance mission controllers at JPL commanded the rover to spend almost all of Sol 429 (May 5) listening for the helicopter’s signal. It came at 11:45 a.m. local Mars time. The data transmitted was limited to deliberately preserve battery charge, but the helicopter’s critical health and safety data were nominal. The radio link between Ingenuity and Perseverance was stable, spacecraft temperatures were within expectation, the solar array was recharging the battery at a rate expected for this season, and the battery was healthy, containing 41% of a full charge.

But one radio communications session does not mean Ingenuity is out of the woods. The increased (light-reducing) dust in the air means charging the helicopter’s batteries to a level that will allow important components (like the clock and heaters) to remain energized throughout the night presents a significant challenge.

Each night for the past three sols, Ingenuity’s heaters have kicked in when its battery temperature was below 5 degrees Fahrenheit (minus 15 degrees Celsius). While on, the heaters kept the temperature of vital helicopter components from dropping farther – down to the ambient environmental temperature of minus 112 degrees Fahrenheit (minus 80 degrees Celsius). But the team believes that the battery couldn’t sustain the energy draw of the onboard heaters throughout the night.

“We have always known that Martian winter and dust storm season would present new challenges for Ingenuity, specifically colder sols, an increase in atmospheric dust, and more frequent dust storms,” said Ingenuity Team Lead Teddy Tzanetos of NASA’s Jet Propulsion Laboratory in Southern California. “Every flight and every mile of distance flown beyond our original 30-sol mission has pushed the spacecraft to its limits each and every sol on Mars.”

The Ingenuity and Perseverance teams have designed a plan they hope will make a difference. Their goal is to help the helicopter’s battery accumulate enough of a charge during the next few sols so that it could support all necessary spacecraft systems during the cold Martian night. Uplinked yesterday, the new commands lower the point at which the helicopter energizes its heaters from when the battery falls below 5 degrees Fahrenheit (minus 15 degrees Celsius) to minus 40 degrees Fahrenheit (minus 40 degrees Celsius).

The helicopter then shuts down quickly, rather than consuming the battery charge with the heaters. The team hopes this strategy will allow the battery to retain whatever charge it collected during the day. The Ingenuity engineers hope that after several days of the helicopter’s array soaking in the limited rays, the battery will have reached a point where the spacecraft can return to normal operations.

Allowing the heaters to remain off overnight will conserve significant battery energy but will also expose components to the cold of Martian night. Developed as a technology demonstration to prove that powered, controlled flight on Mars is possible, the 4-pound (1.8-kilogram) rotorcraft carries many commercial off-the-shelf parts that weren’t designed for the cold of deep space operations.

“Our top priority is to maintain communications with Ingenuity in the next few sols, but even then, we know that there will be significant challenges ahead,” said Tzanetos. “I could not be prouder of our team’s performance over the last year, let alone our aircraft’s incredible achievements on Mars. We are hopeful that we can accumulate battery charge in order to return to nominal operations and continue our mission into the weeks ahead.”


NASA’s Ingenuity Mars Helicopter recently surveyed an intriguing ridgeline near the ancient river delta in Jezero Crater. The images – captured on April 23, during the tiny helicopter’s 27th flight – were taken at the request of the Perseverance Mars rover science team, which wanted a closer look at the sloping outcrop.

“Ingenuity not only provides imagery from an aerial perspective, but allows our team to be two places at once on Mars,” said Ken Farley of Caltech, Perseverance’s project scientist … read more