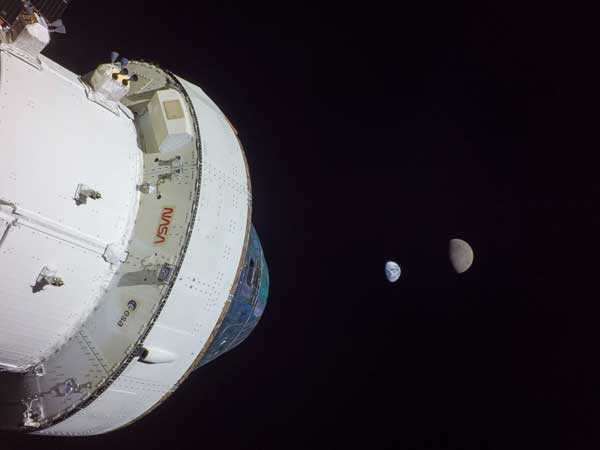 NASA’s uncrewed Orion spacecraft reached a maximum distance of nearly 270,000 miles from Earth during the Artemis I flight test before beginning its journey back toward Earth. Orion captured imagery of the Earth and Moon together from its distant lunar orbit, including this image on Nov. 28, 2022, taken from camera on one of the spacecraft’s solar array wings. (Credits: NASA)

Editor’s note: This advisory was updated Wednesday, Dec. 7, to reflect some changes to briefing participants, as well as RSVP information for media attending in person.

HOUSTON (NASA PR) — NASA will provide live coverage of the Artemis I uncrewed Orion spacecraft’s return flyby of the Moon on Monday, Dec. 5, as well as its return to Earth on Sunday, Dec. 11.

The agency also will host several briefings to discuss the upcoming activities from Johnson Space Center in Houston. NASA will provide live coverage on NASA Television, the agency’s website, and the NASA app.

Orion has begun its return trek toward Earth, completing a burn Dec. 1, to exit a lunar orbit thousands of miles beyond the Moon, where engineers have been testing systems to improve understanding of the spacecraft before future missions with astronauts.

Return lunar flyby coverage will begin at 9 a.m. EST Monday, Dec. 5. The return powered flyby burn, in which the spacecraft will harness the Moon’s gravity and accelerate back toward Earth, is expected at 11:43 a.m. The spacecraft is expected to fly about 79 miles above the lunar surface at 11:42 a.m., just before the burn.

Live coverage as Mission Control, Houston, monitors the spacecraft’s entry, descent, and splashdown off the coast of San Diego will begin at 11 a.m. Sunday, Dec. 11. Splashdown is expected at 12:40 p.m., after which the exploration ground systems recovery team from NASA’s Kennedy Space Center in Florida, working with the U.S. Navy, will recover the spacecraft.

NASA also is hosting a STEM event in collaboration with the San Diego Air and Space Museum at 9 a.m. PST Sunday, Dec. 11, for students and families to learn about Orion and the science, technology, engineering, and math that ensures the success of the agency’s missions. Participants will be able to watch a live stream of the splashdown, participate in STEM hands on activities, and hear from NASA experts and Department of Education Deputy Secretary Cindy Marten.

The agency also will hold a 5 p.m. Thursday, Dec. 8, news conference to preview Orion’s entry through Earth’s atmosphere, descent, and splashdown in the Pacific Ocean off the coast of San Diego.

Following a successful launch on NASA’s Space Launch System rocket, Artemis I is testing the Orion spacecraft on a rigorous mission in the extreme environment of deep space around the Moon before flying astronauts on Artemis II in 2024. Artemis includes a series of increasingly complex missions that will enable human exploration at the Moon where the agency will prepare for future missions with crew to Mars.

Learn more about the Artemis I flight test at: