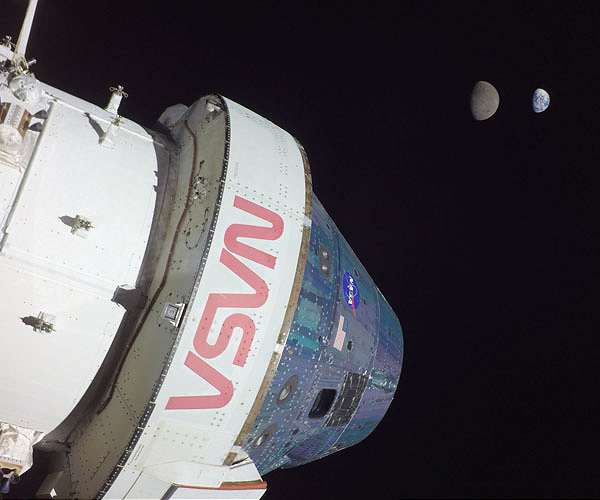 NASA’s Orion space capsule reached its farthest distance from Earth on Monday and successfully completed the first half of a mission that aims to ultimately return American astronauts to the moon.

“Just over an hour ago, Orion set another record clocking its maximum distance from Earth at 270,000 miles,” NASA Administrator Bill Nelson announced at 5 p.m. EST on Monday from Johnson Space Center in Houston.

As Orion entered its 13th day in space, it marked the midpoint of its 26-day mission after initiating its distant retrograde orbit around the moon on Friday.

“Then on Saturday, Orion surpassed the distance record for a mission where a spacecraft designed to carry humans into deep space, and that record before had been set by Apollo 13 at about 248,000 miles from Earth,” Nelson said on Monday.

“We’ve largely completed the outbound leg toward the moon. We’re going to have a period of time circling about the moon in distant retrograde orbit and then we’re going to have the return leg,” Artemis mission manager Mike Sarafin said.

During Monday’s update, Nelson discussed “Commander Moonikin Campos,” the name of the mannequin outfitted with sensors to gather data on what crew members might experience in flight on the spacecraft.

Those sensors will continue to gather data as the craft remains in orbit about 50,000 miles above the lunar surface for about a week to rigorously test its onboard navigation systems before it returns to Earth.

“When Orion comes home on the 11th of December splashing down in a couple of weeks, we look forward to learning what all of the sensors will have told us in order to be able to put four human beings at the top of Artemis 2,” Nelson said.

“And then we’re going to the moon and into lunar orbit in preparation for Artemis 3 where we will have four go into a lunar, polar elliptical orbit that will then have two of the astronauts in the lander go down to the surface – that will be the first woman and the next man.”

NASA administrators indicated that the first leg of the mission was going according to plan following a minor setback in which mission control temporarily lost contact with the unmanned ship for 47 minutes on Wednesday.

“Good performance across the board on all our subsystems and systems, and certainly really happy with the performance,” Orion program manager Howard Hu said Sunday night.

During the second half of its mission, Orion will perform three orbital maintenance burns to keep the spacecraft on course. Engineers also planned to conduct a 24-hour examination of engine performance. And, because Orion has performed so well, the NASA team has added seven new tests to the existing 124 objectives.

“The halfway point in this mission allows and affords us an opportunity to step back and look at what our margins are and where we could be a little smarter to buy down risk and understand the spacecraft’s performance for a crewed flight on the very next mission,” Sarafin said on Monday.

Nelson added while “Artemis 1 has had extraordinary success and has completed a series of history-making events,” the biggest test will be returning to Earth.

“Since this is a test flight, the biggest test after the launch is the reentry, because we want to know that the heat shield works at about 5,000 degrees Fahrenheit, almost half as hot as the sun,” Nelson said, adding “we stress it and we test it.”

Training at Naval Base San Diego is already underway to recover the spacecraft after it splashes down in the Pacific Ocean next month, according to Sarafin.

The Artemis 1 mission, which launched from Kennedy Space Center on Nov. 16, sets the stage for astronauts to return to the lunar surface for the first time since 1972, which will happen sometime in 2025 or 2026 as part of the Artemis 3 mission.

Next year, astronauts will be aboard the Artemis 2 capsule, which will circle the Earth and moon as part of the mission’s first manned test flight.

Artemis would ultimately pave the way for mankind to reach Mars.

“And of course, Artemis builds on Apollo,” Nelson added Monday.

“Not only are we going farther and coming home faster, but Artemis is paving the way to live and work in deep space in a hostile environment to invent, to create and ultimately to go on with humans to Mars.” 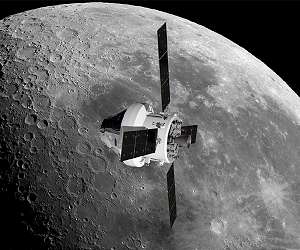 European Service Module powering Orion to the Moon and back


The European Service Module is powering Orion around the Moon and back, providing propulsion, temperature control, electricity as well as storage and delivery for essential supplies such as fuel, water and air. This first Artemis mission is an uncrewed test mission, putting the spacecraft through its paces preparing to send astronauts forward to the Moon.