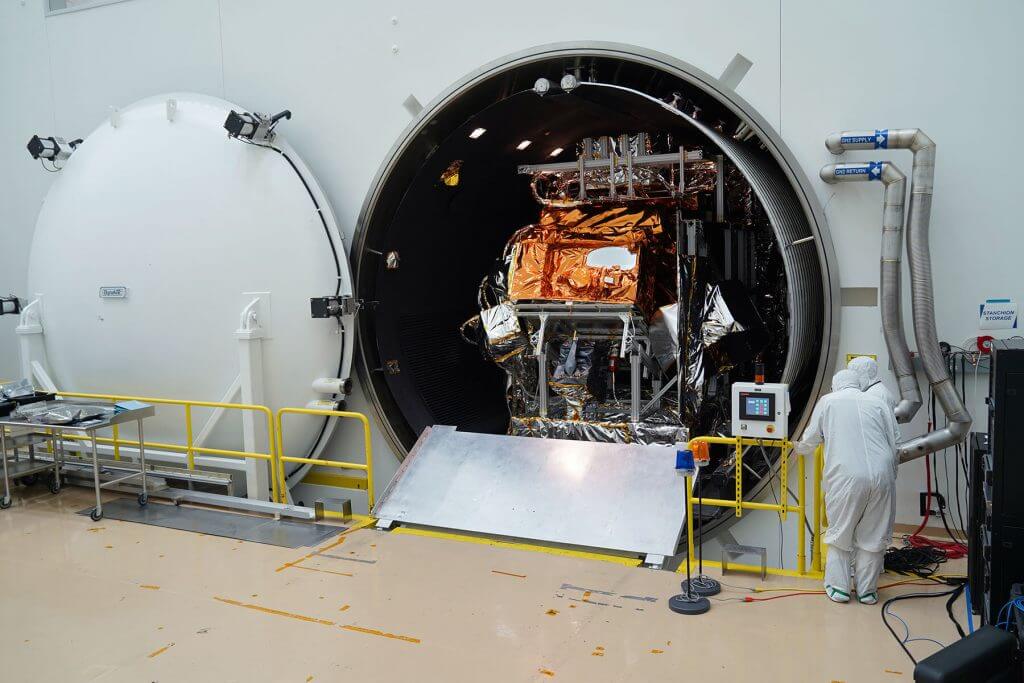 The Joint Polar Satellite System-2 satellite, or JPSS-2, has cleared a critical testing milestone, bringing it a step closer to launch. Last week, the National Oceanic and Atmospheric Administration’s polar-orbiting satellite emerged from the chamber after completing its thermal vacuum testing. This test is meant to show that the spacecraft and all of its instruments will perform successfully when exposed to the harsh environments of space.

“I can absolutely say with 100% certainty that the observatory is working great,” said JPSS Flight Project Manager Andre Dress at NASA’s Goddard Space Flight Center in Greenbelt, Maryland. “All the instruments are performing great, and we’re going to meet all our requirements—and then some.”

JPSS-2, the third satellite in the Joint Polar Satellite System series, will provide data that improves weather forecasts and advance our understanding of extreme weather and climate change. It is slated to launch Nov. 1, 2022, from the Vandenberg Space Force Base in California and will be renamed NOAA-21 after reaching orbit. NASA’s Launch Services Program, based at the agency’s Kennedy Space Center in Florida, is managing the launch.

The thermal vacuum test simulates the vacuum of space and the harsh temperature extremes the satellite will experience while in Earth’s orbit.

“The satellite has to keep itself warm enough in a cold state and cool when it’s in a hot state, and still provide the science performance as it’s going through the temperature transitions,” said Chris Brann, deputy project manager for the JPSS flight project at Goddard. “If it works at the two extremes of hot and cold, it will work in between.”

During testing, the Visible Infrared Imaging Radiometer Suite instrument, or VIIRS, experienced a test equipment anomaly. Engineers determined the anomaly was a result of slight movement between the test equipment and the instrument, which were caused by thermal deformation. Modifications were quickly made to the test set up, and the system was retested—this time with the expected performance.

The thermal vacuum test is the most significant test the satellite will go through, short of launch, Dress said. “There’s no other test like it in the whole life of a mission,” he said. “This one is the biggie.”

It also requires the most resources. Hundreds of people on the team supported this test alone.

The spacecraft emerged from thermal vacuum testing June 4—three months after it entered the chamber. The investigation and equipment fixes delayed the completion of the test by about a month. This also resulted in a delay of the launch date, which was originally scheduled for Sept. 30, 2022.

This summer, the satellite’s solar array will be installed, and the satellite will be moved into a shipping container, which is controlled for temperature and humidity. It will then be shipped to the launch site in California, where it will go through a final series of tests before getting installed on the rocket, Brann said.

So much has to come together when planning for the launch, said JPSS Flight Mission Systems Engineer Lou Parkinson. “Not only do we build the satellite and test the satellite and launch the satellite, but then we need to be able to hand over a successfully operating satellite to NOAA to make sure they can continue operations.”

Together, NASA and NOAA oversee the development, launch, testing, and operation of all the satellites in the JPSS program. NOAA funds and manages the program, operations, and data products. On behalf of NOAA, NASA develops and builds the instruments, spacecraft, and ground system, and launches the satellites, which NOAA operates.

JPSS-2 will scan the globe as it orbits from the North to the South poles, crossing the equator 14 times a day. From 512 miles above Earth, it will observe atmospheric conditions like temperature and moisture, along with extreme weather, like hurricanes, floods, wildfires and drought. Once in orbit, it will continue the work of its predecessors NOAA-20 and the NOAA-NASA Suomi National Polar-orbiting Partnership (Suomi-NPP).

Citation:
NASA completes critical testing milestone for NOAA’s JPSS-2 satellite (2022, June 16)
retrieved 17 June 2022
from https://phys.org/news/2022-06-nasa-critical-milestone-noaa-jpss-.html
This document is subject to copyright. Apart from any fair dealing for the purpose of private study or research, no
part may be reproduced without the written permission. The content is provided for information purposes only.