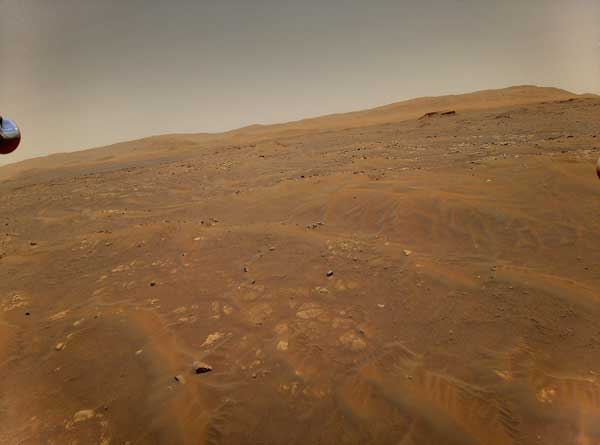 During a conversation with some attendees at the AIAA ASCEND conference in Las Vegas, I mentioned that my long years living in Mojave had put me off any desire to live on Mars. Dusty, isolated and subject to extremes of temperatures and wind speeds, tiny Mojave is solely lacking in charm, amenities and entertainment. That isn’t all bad, mind you. The clear skies, isolation and low population (all 4,699 of us, according to the 2020 census) make it a perfect place to test rockets and experimental aircraft and spacecraft. It’s a good place to stop for food, fuel or a bathroom break on your way to somewhere else. Wind turbines and solar farms surround the town. There’s a gold mine just down the road. Mojave might not be pretty, but it has its uses.

I told the group that it doesn’t mean I wouldn’t want to go to Mars. Who could resist seeing Olympus Mons, Valles Marineris or the intricate layers of the northern ice cap under a red sky? The vistas would be stunning. To stand on another world, so familiar yet so different from Earth. It would be the opportunity of a lifetime. I think lots of people would like to go if given the chance.

But, as the saying goes, Mars would be a nice place to visit, but I wouldn’t want to live there. Dusty, isolated, windswept, a surface with soil infused with toxic perchlorates bombarded by radiation traveling through an atmosphere too thin to support life, and partial gravity that will weaken your bones, Mars is more barren and hostile than any place on Earth (oceans excepted). Say what you will about Mojave (and there is much to say), at least it’s sunny almost every day, the spring and fall are pleasant enough, and you don’t need a pressure suit to walk outside. It’s paradise compared to the Red Planet.

We also discussed William Shatner’s reaction to his spaceflight aboard Blue Origin’s New Shepard. He was stunned when he looked down up a fragile and beautiful Earth, which contains everything needed to support its teeming masses, and out into the black, endless expanse of space. The contrast overwhelmed him, filling him with a deep sense of sadness and grief. The pretend starship captain who roamed the galaxy on a Hollywood soundstage and fought a Gorn at Vasquez Rocks gazed out at space for real and saw death staring back at him.

It was a rather extreme version of what Frank White dubbed the Overview Effect experienced by astronauts who had flown out into space. Usually, the effect was a life-affirming, isn’t space great, let’s protect fragile Earth from the damage we’re doing to it. Shatner’s experience encompassed much of that, especially about protecting our planet, but it was much darker in tone.

We agreed that he was correct. Space is a vacuum utterly hostile to human life that stretches out toward infinity. There are no Earth-like, Class M planets teeming with life in our immediate cosmic vicinity. Barring the development of warp drive, we’re confined to this solar system. The moon and Mars are the two worlds where humans are likely to settle. Mars is Mojave on steroids, but frozen over. The moon is utterly barren. If you lose pressure in your suit on either world, your life expectancy is measured in seconds.

I had a chance to explore Las Vegas after the conference ended. Like Mojave, Sin City is in the middle of a desert. In Mojave, the desert is ever present. There are few places where you can’t see it. Las Vegas makes the desert disappear. Gaze out the window of your 20th floor hotel room, you can see the mountains and desert off in the distance. At ground level, you see the endless attractions of a city built for tourism.

Las Vegas sits in the middle of a metropolitan area with more than 2.8 million people. It’s large enough that it now has what every self-respecting North American city needs to be taken seriously: professional sports teams. They are the NFL’s vagabond Raiders, late of Oakland and Los Angeles; and the Golden Knights, an expansion hockey team that somehow made it to the Stanley Cup Finals in its first year. (They lost in five games.) I wonder what odds the Vegas experts put on the team getting that far in its inaugural season.

Hockey in Las Vegas is proof that anything is possible in the middle of the desert. Maybe settling the Red Planet would be easier than I thought. I’ve seen artists’ conceptions that show cities built under giant domes on the Martian surface. The dome would serve the same purpose as Earth’s atmosphere.

Maybe. I’m not an engineer, so I don’t know whether such structures would be technically feasible. You could build the dome, but how good would it be in holding pressure? And what about radiation exposure? Would it be better to establish settlements underground in lava tubes or caves?

I pondered all this as I wandered into the Forum Shops at Caesars Palace. This indoor mall contains every high-class retailer you’ve had ever heard of – Apple, Versace, Tiffany & Co., this list goes on – and some you haven’t. You could spend a whole day in there shopping, eating and drinking if you had enough money to spend.

The stores didn’t interest me. It was the construction of the building that I found fascinating. The mall was laid out in Roman style, with arches, statues, and domed ceilings. There are benches made of fallen columns, all equipped with very unRoman electrical outlets. It’s Trajan’s Forum, 21st century style.

The ceilings were adorned with a fake blue sky and clouds. This, I thought, was what public spaces might look like on a future Mars colony. The ceiling might not be the blue sky of Earth but the pinkish red one of Mars. Living on the Red Planet might be akin to living in a shopping mall — possibly buried under regolith to protect colonists from radiation.

Las Vegas excels at keeping people inside. They want visitors inside the casinos, restaurants, bars, stores and shows where they will spend their hard earned money. Some will win big, most will lose money. Whatever the outcome, Las Vegas wants to send people away happy and wanting to return for more by letting them indulge in whatever pleasures they desire. It’s something the emperors of Rome would understand.

As important as inside is, Las Vegas also thrives outside. The Strip is filled with people walking along Las Vegas Boulevard. The Bellagio has a fountain show to the tune “Singing in the Rain” every 15 minutes after 8 p.m. A fake volcano erupts on a regular schedule outside the Mirage. Gondolas move along the artificial canals at The Venetian. Scantily clad women in showgirl outfits walk the Strip offering to take pictures with you for a fee.

A few miles away, visitors can board thrill rides named X-Scream, Insanity and Big Show located on the outside of the Stratosphere Tower. They find themselves hanging more than 900 ft above the ground with all of Las Vegas spread out below them.

Further down Las Vegas Boulevard is the Fremont Street Experience. The outdoor entertainment area is roofed with screens that show music videos and blare out the accompanying music at ear splitting levels. Live music is played from several stages on a street lined with casinos, bars and restaurants. There are zip lines overhead for the more adventurous tourists.

Unless Mars can be terraformed, there really won’t be any outside experiences like the ones in Las Vegas. Living on the Red Planet will be a lot more like the artificial inside world that Sin City has perfected. It will be a very different experience for settlers coming from Earth. Those born on Mars — if women can bring healthy fetuses to term — will know no other existence. Growing up in much weaker gravity, they might never be able to visit Earth.

Las Vegas cost an enormous amount to build over the decades. Tourism and entertainment provided the business cases that inspired investors to take the risk. They believed that a place that allowed people to indulge in their every vice coupled with a legalized gambling system that favored the house was a winning formula. They were right.

Infrastructure is expensive. That is particularly true in barren areas where there is no development. It’s much easier to expand an existing settled area than to build one from scratch. But, that is exactly what the first settlers on Mars will have to do. It will be a monumental task.

What will inspire investors to put money into a Martian colony? What, other than tourism, will inspire people to visit the Red Planet? Who will want to move there permanently? And in what numbers? Will a better life await people in an off-world colony? Will Mars colonies be more like Mojave than Las Vegas? Or McMurdo Station in Antarctica?

Past migrations on Earth were driven by many factors. They all took place within the same terrestrial biosphere. The New World was different from Europe, but it wasn’t that different. The Americas were already populated by millions of people. Mars will be an artificial biosphere with limited access to the natural environment. There is only so much technology will do to make Mars seem Earth like.

The wide sweep of human history teaches us to never say never. As I walked the Strip, I kept thinking that gangster Bugsy Siegal would be gob smacked by what Las Vegas has become if you could resurrect the murderous psychopath from the great beyond. What would Julius Caesar think of the gaudy palace that has been built in his name? Or the cars on the Strip and airplanes overhead?

Mars might one day have great cities to rival or even surpass those of Earth. But, it will be a tough slog. And it won’t be happening any time soon.