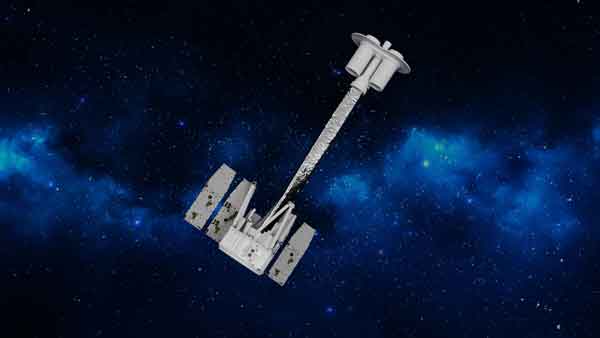 ROME (ASI PR) — A lot of Italian science born from the exclusive collaboration between NASA and the Italian Space Agency (ASI) was aboard the IXPE (Imaging X-ray Polarimetry Explorer) satellite, which took off punctually from the Kennedy Space Center in Florida at 7.00 Italian time on 9 December. A Falcon 9 carrier from the private company SpaceX was used for the launch. The launch was attended by the president of the Italian Space Agency (ASI), Giorgio Saccoccia, and the administrator of NASA, Bill Nelson.

IXPE is the first mission entirely dedicated to the study of the universe through the polarization of X-rays, and to do so it will use an entirely “made in Italy” technology. Three telescopes with detectors funded by ASI and developed by a team of scientists from the National Institute of Nuclear Physics (INFN) and the National Institute of Astrophysics (INAF) are installed on board the IXPE.

The ‘heart’ of the telescopes aboard IXPE is represented by the three Gas Pixel Detectors: new generation detectors that exploit a technology developed over the last 15 years and that make use of the skills acquired by INFN in the field of particle physics and by INAF in the study of the universe in high energy. Thanks to its innovative technology, IXPE will be able to measure not only the image and energy of celestial sources, but will also be able to obtain, for the first time, direct indications on the characteristics of the electromagnetic fields associated with them.

“NASA and the Italian Space Agency (ASI), the United States and Italy have a long tradition of bilateral cooperation on successful space missions and the IXPE mission represents another virtuous example,” recalled ASI President Giorgio Saccoccia, “of the Italian ability to work with international partners for the growth of space activities at a global level. We are also particularly proud of being able to deliver IXPE’s innovative scientific instrumentation on time, despite the challenge of the pandemic: a true demonstration of excellence of the Italian mission team. Now the word goes to science, to new discoveries made possible by our country’s space commitment!”

“IXPE will observe the universe in a new light, in the true sense of the word, and what will allow it to do so is its innovative all-Italian technological ‘heart’, the result of a long and important research and development work conducted entirely in-house. in our laboratories of the INFN Sections of Pisa and Turin”, underlines Antonio Zoccoli, president of INFN. “We must be proud of the start of this mission, even more so in the difficult contingency in which we worked to complete the work within the schedule: I would therefore also like to thank all those who have allowed it.”

“The IXPE mission in collaboration with NASA represents a fundamental milestone that enhances the great tradition of Italian astrophysics in the study of the Universe with X and gamma rays, as already happened with the BeppoSAX, AGILE space missions and participation in Fermi” said Marco Tavani, president of the National Institute of Astrophysics. “The high energy astrophysics community has been waiting for an X-polarimetry instrument for decades. Now Italy is realizing the heart of the IXPE mission and it will be exciting to see the first results: a moment long awaited that we are sure will not disappoint expectations. “

The satellite was placed in a circular equatorial orbit at about 600 km altitude with an inclination of only 0.2 degrees. During the first two years of the mission, IXPE will open a new astrophysics ‘window’ by carrying out for the first time highly sensitive polarization measurements from celestial sources emitting in X-rays. The mission’s main targets will be active galactic nuclei (AGN), microquasars, pulsars and pulsars wind nebulae, magnetars, binaries in X-rays, supernova remnants and galactic center.

IXPE will provide contemporary measurements of polarization, variability, spectral and imaging, thus allowing to study the geometry and physical processes of radiation emission and acceleration of particles, in environments with extreme magnetic and gravitational fields.

IXPE is a joint NASA/ASI mission, selected by NASA on January 3, 2017, which is part of the SMEX (Small Mission Explorer) space program. Thanks to the contribution of the OHB-I industrial component, ASI was able to deliver the flight models to NASA within the established times, as required by participation in the SMEX space programs.

In addition to managing the Italian participation in the IXPE program, ASI provides the Luigi Broglio (BSC) space center in Malindi in Kenya as the primary ground station for satellite tracking, also supported by Telespazio and the Space Science Data Center (SSDC) at the headquarters of the Agency in Rome for the activities of scientific data processing and analysis.

Specifically, the BSC successfully performed two important supports: 1) at 06:00 (UTC) the support to SpaceX – Falcon 9, as part of the collaboration between ASI and SpaceX for TT&C activities (Telemetry, Tracking and Command) from the BSC; 2) at 06:31 (UTC), after its separation from the Falcon 9 carrier, support for the IXPE satellite, as part of the ASI – NASA collaboration.

The center carried out all the upgrade activities necessary to make the Malindi Ground Station compliant with NASA’s requirements. In addition, it has supported the mission in all phases of pre-launch operations, including the Radio Frequency Compatibility Test (RFCT) at NASA, and will continue support for scientific data acquisition throughout the satellite’s nominal life. To carry out the activities related to the supply of these services, ASI makes use of its own staff employed at the Rome office and taken the BSC and the industrial support offered by Telespazio within the two Operations and Maintenance contracts of the Malindi BSC.