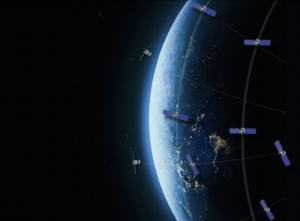 Under the contract, announced last week by the Space Force’s Space Systems Command, PredaSAR will install a laser communications terminal on one of its satellites and attempt to pass data to the Blackjack constellation.

Blackjack satellites will be deployed in low Earth orbit for communications, navigation and missile detection experiments.

Neither Blackjack nor PredaSAR has yet deployed any satellites. DARPA plans to launch as many as 12 satellites in 2022.  PredaSAR, founded in 2019, is projecting its first launch for the fourth quarter of 2022. The company intends to become a commercial provider of imagery collected by synthetic aperture radar sensors.

PredaSAR will install an optical communications terminal made by SA Photonics on one of its satellites and will attempt to send data to a Blackjack satellites. The Space Development Agency will conduct a similar inter-satellite demonstration with radar imaging startup Capella Space using a Mynaric optical terminal.

CASINO program manager Lt. Col. Tim Trimailo said the PredaSAR demo is similar to SDA’s project with Capella Space but with a different optical crosslink terminal. “We are in close contact with SDA to coordinate these demos, collaborate where possible, and share lessons learned and best practices,” he said in a statement.

The Blackjack and PredaSAR constellations will “demonstrate the military utility of proliferated low Earth orbit satellite architectures,” Trimailo said. The long-term goal is to “create a government-commercial hybrid architecture in LEO, allowing a government constellation to utilize data collected from commercial satellites.”

Marc Bell, CEO of PredaSAR’s parent company Terran Orbital, said this hybrid architecture demonstration will “add to the resilience, capability, and capacity to meet time-sensitive needs of our forces around the world.”