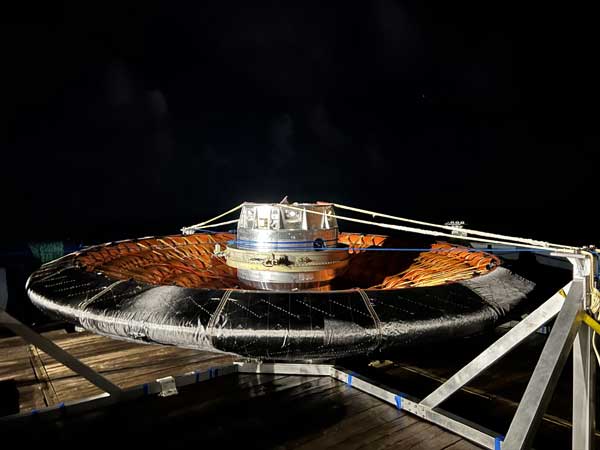 NASA conducted a successful flight test of a novel inflatable heat shield that could one day land humans and large payloads on Mars.

The Low-Earth Orbit Flight Test of an Inflatable Decelerator (LOFTID) was launched aboard an United Launch Alliance (ULA) Atlas V rocket that lifted off on Nov. 10 from the Vandenberg Space Force Base in California. LOFTID was a secondary payload on the launch of the Joint Polar Joint Polar Satellite System-2 (JPSS-2) weather satellite.

LOFTID inflated before separating from the Atlas V’s Centaur upper stage and reentering the atmosphere over the Pacific Ocean. The test vehicle ejected a backup data recorder module before it splashed down under a parachute. The test vehicle and the backup module were recovered from the ocean. The backup module was there in case LOFTID and the primary data recorder were lost at sea.

The cone-shaped LOFTID is 6 meters (19.7 ft) in diameter, making it the largest blunt body aeroshell to ever reenter from space. Traditional ablative heat shields used in previous missions have been smaller, limiting the size of spacecraft that can enter planets and moons with atmospheres.

LOFTID is composed of a stack of pressurized concentric rings known as tori composed of braided synthetic fibers that are 10 times stronger than steel by weight. The reentry system is equipped with a flexible thermal protection system that insulate the rings from heat in excess of 1,600 C (2,900 F). The foldable, scalable heat shield takes up less room in a launch vehicle.

The folded IAD separated from the the booster and inflated at an altitude of 84 km (52.2 miles). The decelerator then descended with the payload bay of the rocket.

“The IAD has systematically reduced the velocity of the payload through aerodynamic drag and followed the predicted trajectory. This is first time that an IAD is designed specifically for spent stage recovery. All the objectives of the mission were successfully demonstrated,” ISRO said in a press release.

Designed and developed by Vikram Sarabhai Space Centre (VSSC), the IAD is intended for use in recovering spent rocket stages. It can also be used to land spacecraft on other worlds.

On July 24, the Japan Aerospace Exploration Agency (JAXA) tested an air-breathing scramjet engine capable of accelerating a vehicle to five or six times the speed of sound. The experiment was launched by a S-520 sounding rocket from the Uchinoura Space Center.

JAXA aims to develop scramjets that can be incorporated into intercontinental high-speed transport aircraft and launch vehicles.

JAXA said the rocket reached a maximum altitude of 168 km (104.4 miles) at 3 minutes 26 minutes into the flight. The flight ended when the payload reached the ocean 6 minutes 52 seconds after liftoff from Uchinoura.

“During descent, the test specimen reaches hypersonic speed (Mach number approximately 5.5), and data on aerodynamic heating generated outside the engine and supersonic combustion inside the engine are acquired. The acquired data is transmitted to the ground station by radio waves,” the space agency added. “When flying at hypersonic speed, the airflow at the inlet is hypersonic, but it is decelerated at the air intake port to increase the pressure (combustion pressure).”

In October, Sandia National Laboratory launched a pair of TeMale III rockets with 24 experiments aboard to support the development of hypersonic weapons by the U.S. Army and U.S. Navy.

One rocket followed a traditional high-arc trajectory while the other booster reached hypersonic speed traveling on a different trajectory.

“This vehicle was a revolutionary success, spending approximately one minute above Mach 9 in a relevant altitude band, which is an unprecedented accomplishment for a sounding rocket,” said Ben English, head of Sandia’s High Operational Tempo for Hypersonics team.

Launch of the SpEED Demon

The flight tested a suite of instruments designed to study the Sporadic E layer in the ionosphere, the electrified upper portion of Earth’s atmosphere that’s made of ionized gas called plasma. Sporadic-E layers on Earth can cause unpredictable disruptions to radio communications.

“Sporadic-E layers are like patchy, invisible clouds of dense plasma that sometimes disrupt radio communications,” said Aroh Barjatya, SpEED Demon principal investigator and director of the Embry-Riddle’s Space and Atmospheric Instrumentation Lab. “These layers are seen throughout the globe, with those at the Earth’s mid-latitudes increasing in abundance and activity during summer. Having a complete understanding of them is necessary to model them accurately and predict their occurrence.”

The instrument package, which included new and heritage instruments already flown in space, will be improved based on the results of the flight. A follow-on launch is planned from the Kwajalein Atoll in the Marshall Islands in summer 2024.

The success of SpaceX has led Europeans to rethink their strategy for developing new boosters. Of particular interest are launch vehicles that could be reused multiple times like the first stages of the Falcon 9 and Falcon Heavy boosters.

On June 26, the German Aerospace Center (DLR) launched the STORT mission aboard a three-stage VSB-30 Improved-Orion rocket from the Andoya Space rocket range in Norway. STORT is a German acronym that translates into “key technologies for high-energetic return flights of reusable launcher stages.”

The flight’s objective was to simulate the temperatures and loads that a booster would experience during reentry. The rocket’s third stage was fitted with five ceramic segments that were accelerated to a velocity of around 9,000 km/h (5,592 mph), which is in excess of Mach 8. Measurements were taken by heat flow sensors, thermocouples and pressure sensors attached to the rocket.

The Technical University of Munich constructed the carbon-fiber-reinforced polymers module used on the flight. The University of Arizona performed simulations for the flight experiment. DLR’s Mobile Rocket Base department was responsible for planning and executing the mission.

On Feb. 26, the North Korea People’s Army Strategic Rocket Force launched the two-stage Hwasong-17 intercontinental ballistic missiles from Sunan. The flight’s purpose was to test an imaging system for use on a future reconnaissance satellite. The payload reached an apogee of about 620 km (385 miles).

On Dec. 18, North Korea launched a pair of Pukguksong-2 rockets in additional tests of the reconnaissance cameras.

On Oct. 23, the Brazilian Air Force launched a VSB-30 sounding rocket to an altitude of 227 km (141 miles) to test a microgravity experiment carrier for the Brazilian Space Agency. The launch was conducted from the Alcantara Space Center.