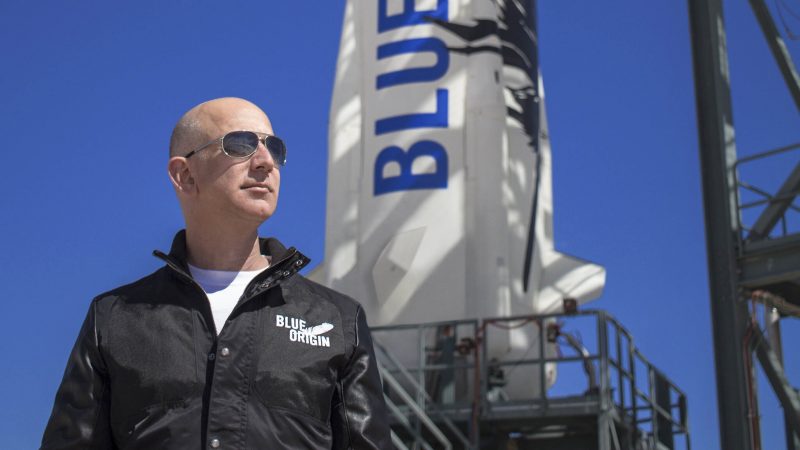 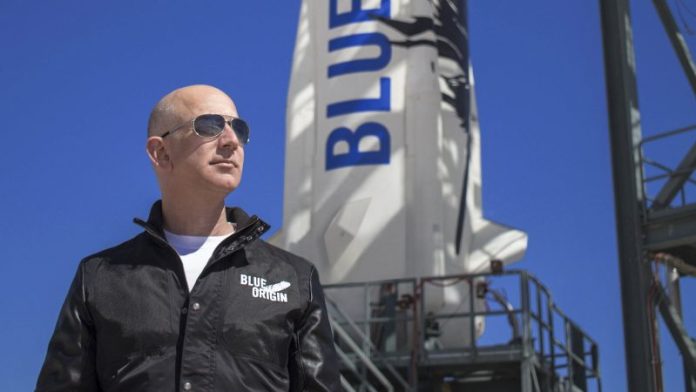 News that the Amazon overlord is about to jet off has got the Virgin boss clamoring to get there first. You can do it, Richard!

It’s famously impossible to take a bathroom break during a rocket launch, meaning Jeff Bezos will soon experience what it’s like to be one of his warehouse workers. Or, as the Amazon boss put it last week: “To see the Earth from space … changes your relationship with humanity.” That’s hugely encouraging. I feel like we’re just one successful interstellar wormhole mission to a distant galaxy away from allowing employees to unionize.

Anyway, along with his brother, Mark, and an auction winner (bidding has passed the $4m mark), Bezos is headed for space next month – or at least for the edge of it. Kind of like the ring road of space, which is home to a thin atmosphere, two discount carpet shops and a powerful sense that you just mic-dropped the entire tax avoiders’ WhatsApp group.

Bezos announced that he’d be riding up in his Blue Origin rocket via a mildly alarming video last week in which a camera crew films a perfectly lit, remorselessly off-the-cuff chat between him and his brother. “I really want you to come with me,” ad-libs Jeff to Mark. “I think it would be meaningful.”

And why not? I trust the Bezos brothers have a normal and healthy sibling relationship, allowing Mark to use up their entire three minutes of zero gravity contemplating the big questions, such as: “Remember when you cracked my head open?”; “Did you know Mom messaged me last night to confirm I’m the favorite child?”; “Someone who wants a space-wedgie says what?”; and, “Would you call your general look Vin Diesel after dioxin poisoning?”

But enough of the bros. Needless to say, my first thought on reading this news was: poor Richard Branson. Just think how long Britain’s Best Loved BusinessmanTM has been threatening to give us a 10-minute break by going to space. His Virgin Galactic operation has basically been issuing announcements that commercial space travel is “set to become a reality next year” since seemingly around 1986. How dare Bezos pull this shit? It must have felt a lot like this when people started buying their U2 CDs from Amazon instead of a Virgin Megastore.

And yet it seems all is not lost for the Virgin boss, whose most notable recent appearance was popping up last year to ask for a bailout for his airline on the basis that “creating positive social and environmental impact has always been at the heart of this brand”. (To which the only possible reply was: it’s an AIRLINE, you preposterous chancer.) Imagine my mirth to read, just days after the Bezos announcement, a report that Virgin Galactic is now scrambling to send Branson up on a suborbital flight two whole weeks before the Amazon overlord.

But of course. Of COURSE Richard can’t cope with being the galactic Salieri to Bezos’s galactic Mozart. I’ve said it before but I’ll say it again: men are incredible! As is the 21st century. It’s wild to see the complex aspirations and vast rivalries of the 20th-century space race basically now reduced to a willy-waver between two taxophobic billionaires whose personality is “disliking ties”.

As for whether the rumours are true, Virgin has declined to deny the report, saying gnomically: “At this time, we have not determined the date of our next flight.” But if Branson were to galactically gazump Bezos, it would surely serve as a tribute to the awesome pettiness of humankind. I’m sorry – of mankind.

Not that there wouldn’t be a woman involved, I’m sure. You always need at least one to serve as a prop in the obligatory picture in which Richard is guffawing away while carrying a lady in his arms. (Then again, in zero gravity women don’t even need men to lift them up, which leaves us with one unavoidable philosophical question: in space, what is the point of Richard Branson?)

Clearly, the true banter option would be for fellow space-racer Elon Musk to somehow pop up above the Kármán line around the middle of next week, simply using the location as the backdrop to insult a cryptocurrency. But failing that, the only way the whole race could be more dignified is if Branson himself bought the Blue Origin auction ticket, forcing Bezos to take him along at the same time, with the era-defining footage beamed back to Earth simply featuring the two billionaires attempting to pinch and scratch each other in slow motion, soundtracked with the historic words “Not in the face! Not in the face!”