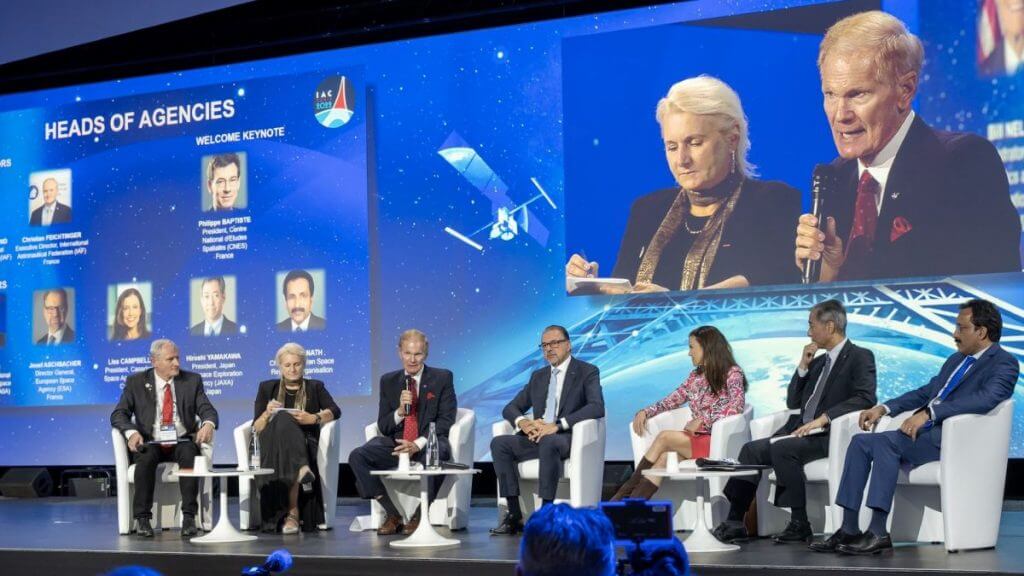 PARIS — Heads of the world’s major space agencies presented their big plans for the coming years at a major congress in Paris, while underlining the serious challenges that could affect space and humanity.

The first major mission milestone discussed is already speeding along. “This weekend, at 15,000 miles an hour, a spacecraft is going to ram a small asteroid that revolves around a larger asteroid,” NASA administrator Bill Nelson said, speaking about the upcoming DART mission impact. “We’re going to see if we can, just a little bit, move that trajectory so that, as we look out there and try to find the killer asteroids that will threaten the Earth … that we could get it far enough away so that by the time it gets to Earth it would miss us.”

There were two notable absentees from this year’s Heads of Agencies. The China National Space Administration’s (CNSA) vice administrator Wu Yanhua dropped out of the panel due to a schedule conflict, according to organizers. Updates on the country’s lunar plans are still expected later during the five-day congress.

Russia is not present at IAC following the ongoing Russian invasion of Ukraine that began in February. Its delegates were granted visas, however, according to Russian news agency TASS (opens in new tab). While much of the world has responded with condemnation to the invasion, Nelson stated that cooperation in space (opens in new tab) between the United States and Russia is still proceeding. Both are partners in the International Space Station program.

“Despite the political troubles on terra firma you still see that professional relationship working in the civilian space arena,” Nelson said.

ESA’s Josef Aschbacher said that the current economic and geopolitical situation makes the environment around the upcoming ESA ministerial meeting, at which he will request more than 18 billion euros ($18 billion USD) from its member states, a roughly 25% increase in funding.

ESA’s big missions in the near future include the launch of the JUpiter ICy moons Explorer (JUICE) in the second quarter of 2023 and the first launch of Ariane 6, also expected next year.

Aschbacher added that ESA is also looking to select a handful from 23,000 applicants to be the agency’s next astronauts.

CSA’s Lisa Campbell also noted challenges, including the fact that Canada suffers 7,500 wildfires each year, burning over 2.5 million hectares of forests. “In response to this, we’re developing the WildFireSat mission to increase our ability to monitor wildfires,” Campbell said.

Related: The devastating wildfires of 2021 are breaking records and satellites are tracking it all

She also noted that space technology is advancing quickly by combining a broad range of AI computing, meaning “we can generate infinite solutions to many of the challenges we face.”

— One week until NASA’s DART slams a spacecraft into an asteroid on Sept. 26. Watch in free webcasts

In terms of major missions, Campbell highlighted that the country is working on Canadarm3 as part of the Lunar Gateway project and will send an astronaut on the Artemis 2 crewed lunar flyby mission, with the astronaut to be selected in the coming months. She also revealed that the CSA will announce in the coming weeks the winning proposal for a lunar south pole rover for a 2026 mission.

JAXA’s Hiroshi Yamakawa highlighted that Japan is working on numerous exploration projects, including the MMX sample return mission to Mars’ moon Phobos and a human-driven, pressurized lunar rover. JAXA and its industry partners are also close to getting the new H3 rocket ready for its test flight, with launch planned for before the end of the Japanese fiscal year, which ends March 2023.

ISRO Chairman S. Somanath touched on his agency’s plans to send astronauts into orbit, stating that the human-rated launcher is ready, but the development of the Gaganyaan crew capsule and its escape system is proving more challenging.

S. Somanth added that India is seeing a great increase in space startups, including several companies building small satellites India, adding that ISRO is happy to support and advance the work of these commercial firms.

The IAC in Paris is the 73rd edition of the annual congress, which brings together space agencies, astronauts, scientists, researchers, industry and press.

This years’ edition, running with the theme “Space for @ll,” has attracted a record 8,700 registrants from 130 countries, International Astronautical Federation president Pascale Ehrenfreund said in an opening ceremony speech.