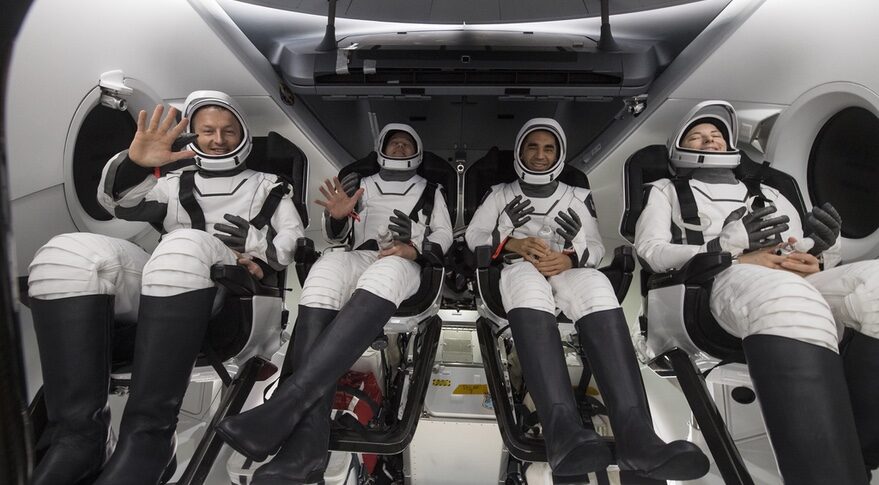 WASHINGTON — A Crew Dragon spacecraft splashed down in the Gulf of Mexico May 6, returning four astronauts to Earth after nearly six months on the International Space Station.

The Crew Dragon spacecraft Endurance splashed down off the coast from Tampa, Florida, at 12:43 a.m. Eastern, after a normal reentry. Recovery teams placed the spacecraft onto a boat a half-hour later.

The spacecraft undocked from the ISS nearly 24 hours earlier with the four Crew-3 astronauts on board: Raja Chari, Thomas Marshburn and Kayla Barron of NASA and Matthias Maurer of the European Space Agency. The four launched to the station on that spacecraft last November.

“We’re glad to be back. Thanks for letting us take Endurance on a shakedown cruise,” Chari, the Crew-3 commander, said moments after splashdown. “It was a great ride.”

During a post-splashdown briefing, Bill Gerstenmaier, vice president of build and flight reliability at SpaceX, said the Crew-3 astronauts noticed a small piece of debris float away from the spacecraft after its May 5 docking. Photos suggest the piece is part of a frangible nut that was used to hold a tension rod that connected the spacecraft’s trunk to the Falcon 9 rocket during launch. The debris did not pose a risk to either the spacecraft or the ISS.

The nut is designed to be captured in a hole in the trunk but managed to wiggle out, he said. “It’s something we don’t want to have happen. We’ll figure out the right way” to keep it from happening, he said. “We’ll look for a design change.”

The splashdown wraps up an active month in human spaceflight for SpaceX. The company launched the Crew Dragon spacecraft Endeavour April 8 on the commercial Ax-1 mission for Axiom Space. The spacecraft docked with the ISS a day later and its crew of four private astronauts remained there 15 days, undocking April 24 for a splashdown off the coast of Jacksonville, Florida, April 25.

Less than 39 hours after that splashdown, another Crew Dragon spacecraft, Freedom, lifted off from the Kennedy Space Center on the Crew-4 mission to the ISS. It docked to the station after a 16-hour journey, delivering NASA astronauts Kjell Lindgren, Robert Hines and and Jessica Watkins and ESA astronaut Samantha Cristoforetti. They will remain on the station until relieved by the Crew-5 mission, projected to launch in September on the same Endurance spacecraft that returned Crew-3.

“It is, for us, unprecedented,” Kathy Lueders, NASA associate administrator for space operations, said of the recent pace of operations at the post-splashdown briefing. She said the NASA and SpaceX teams were being “thoughtful” about the size of teams and amount of work they’re doing. “You’ve just got to do it one step at a time.”

“I think this is a great time to be in spaceflight,” Gerstenmaier said, noting that SpaceX was also preparing for a Falcon 9 launch of Starlink satellites from the Kennedy Space Center that took place at 5:42 a.m. Eastern. “I think we’re poised well as a company to support these multiple activities.”

“Maybe we can all take a few days of rest,” Lueders added.