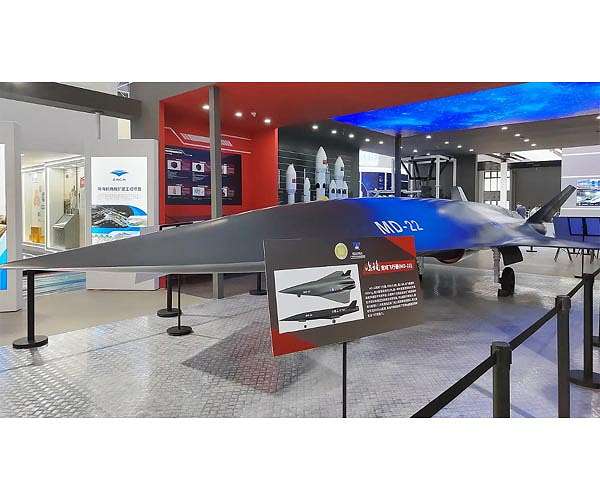 China has made significant advancements in the security and defence industries, and the Zhuhai airshow showcases its cutting-edge military weaponry technology. This includes concept fighter aircraft like the J-20 and J-16 as well as state-of-the-art unmanned aerial vehicles (UAVs), including stealth and hypersonic models like the MD-22. The MD-22 hypersonic UAV is said to be a unique idea that could help China compete with other countries in the hypersonic field.

The alleged hypersonic potential of China’s MD-22 UAV has piqued the interest of many. There is hope that the MD-22, created by China’s Guangdong Aerodynamic Research Academy (GARA) and the CAS Institute of Mechanics, will one day take people to the very edge of space. Rather than viewing the MD-22 as a singular drone-style weapon, it should be seen as a testing ground for the rapidly developing field of hypersonic weapons.

If the MD-22’s specifications were true, it would be an incredible UAV, capable of travelling 8,000 kilometres at an average speed of 8,645 kilometres per hour while carrying more than 1,800 kilograms (4,000 pounds). It measures 10.8 metres long, or the length of a school bus; 4.5 metres wide, or the width of a Mini Cooper; and 1.6 metres high. It has a weight of one tonne. The US MQ-9 Reaper weighs more than 2 tonnes.

The turboram accelerates the MD-22 to its maximum speed during takeoff, after which it switches to the scramjet for hypersonic flight. Potentially matching the MD-22’s physical attributes are its theoretical capabilities. However, the claimed range of the aircraft is disputable unless carried by other large aircraft or rocket boosters. The similarities between the MD-22 and the Hongdu GJ-11 Sharp Sword stealth UAVs also highlight the aircraft’s status as a showpiece. The practicality of its ostensibly high-altitude potential is also unclear.

The MD-22 is said to be capable of reaching speeds of up to Mach 7 and utilising a wide range of thrusts thanks to its uniquely streamlined exterior and internal architecture. Supersonic speeds are those between Mach 1 and Mach 5, whereas hypersonic speeds are those above Mach 5. Sound has a speed of 1,225 kilometres per hour (699 miles per hour), meaning that hypersonic missiles can reach speeds of at least 6,000 kilometres per hour (3,748 miles per hour).

However, the MD-22 is rumoured to have 24 internal and storage pylons that can take up to 680 kilograms (1,500 pounds) each, while the MQ-9 Reaper only has four hard points for weaponry. This means that the standard range of the vehicle can be expanded by installing additional fuel tanks. With a heavy payload, the Chinese-made MD-22 could theoretically travel faster than hypersonic missiles.

The MD-22, on the other hand, is purely theoretical outside of the AVIC Group’s “Nantianmen Project,” which is functionally equivalent to discussions of the Star Wars universe. Still, there are aspects of such a discussion that would be relevant even now.

As major nations work to improve their hypersonic weapons capabilities, academics, professionals, and policymakers debate whether the floodgates are opening, resulting in a new arms race in the local domain, near- or outer-space, or both. The “space race” is back, with big countries once again showing a lot of interest in space and low-orbit military systems and striving for rapid breakthroughs.

Because of competing interests and rising competitiveness among governments in near- or outer-space, the likelihood of an incident leading to armed conflict has increased significantly. A war between nations could have devastating effects on international stability if it is sparked by events in space. There is a significant danger that this may spark a security dilemma, increasing the likelihood that many states will be dragged into a war that uses elements of both conventional and nuclear warfare.

Like any other country, China is conducting extensive research in electronics, thermal management, and command and control as part of a technology race to develop hypersonic weapons. China’s drones are built with upgrades and new uses in mind, suggesting that the country’s leaders are already planning for or even testing a variety of applications and follow-up models.

It is expected that China will showcase a broad variety of UAVs at upcoming shows, either to boast about its achievements or to plant the idea that massive advances are being made in the field of hypersonic weaponry.

Other Chinese propeller-driven or subsonic UAVs are comparable to their American counterparts. Such as the Chengdu GJ-1 (-1) / Wing Loong 1 armed drones, which are essentially equal to the MQ-1/MQ-9; the Rainbow CH-7 stealth high-altitude drone, which resembles the X-47B; and the WZ-8 / BZK-008 CH-91 surveillance drone, which is roughly equivalent to the RQ-5.

The MD-22, on the other hand, could, in theory, be a great leap forward and be used to make sixth-generation or even more advanced seventh-generation planes.

Shih-yueh Yang is a professor in the Department of International Affairs and Business at Nanhua University, Taiwan, Republic of China, and the editorial consultant at Asia-Pacific Defense.