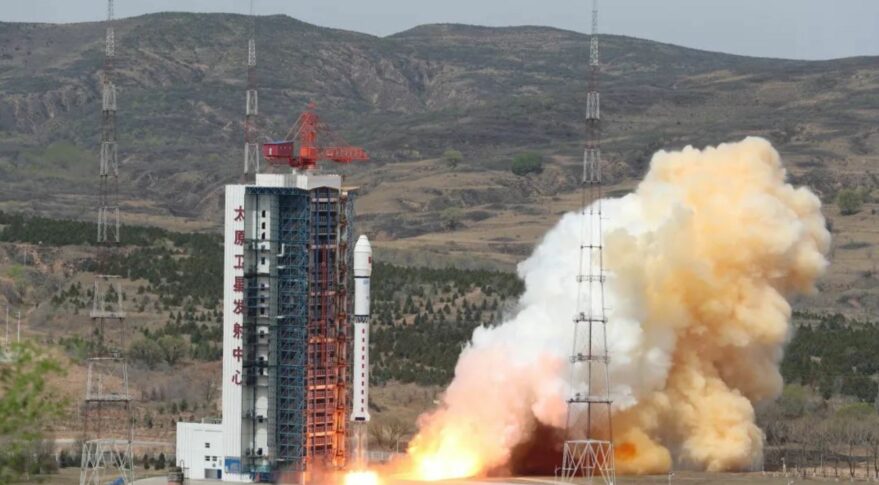 A Long March 2D lifted off from the Taiyuan Satellite Launch Center, north China, at 10:38 p.m. Eastern May 4, with thermal insulation tiles falling away as the rocket climbed into the sky.

Aboard were seven Jilin-1 Gaofen (“high resolution”) 03D satellites, numbered 27 to 33, and the larger, wide field of view Jilin-1 Kuanfu 01C, for Changguang Satellite Technology (CGST), a commercial remote sensing offshoot from the state-owned Changchun Institute of Optics, Fine Mechanics and Physics (CIOMP) under the Chinese Academy of Sciences (CAS).

The roughly 43-kilogram Jilin-1 Gaofen satellites return panchromatic images with a resolution of 0.75 meters or three meters in multispectral mode.

Jilin-1 Kuanfu 01C has a mass of around 1,250 kilograms. It has a swath width of greater than 150 kilometers, according to Changguang Satellite, providing image products with a resolution of 0.5 meters in full color and 2 meters in multispectral mode.

The launch followed the April 30 (Universal time) launch of five other Jilin-1 satellites, namely Jilin-1 Gaofen 03D04 to 07 and the 0.50-meter-resolution Gaofen 04A. The launch had been delayed by bad weather.

The satellites were sent into roughly 530 by 546-kilometer sun-synchronous orbits by a Long March 11 solid rocket launched from a platform in the Yellow Sea. It was China’s third sea launch and the most southerly so far from the sea launch facilities based at Haiyang, Shandong province.

China has developed infrastructure at Haiyang to allow launches from the seas. The capabilities may help ease congestion at other national spaceports and reduce debris falling near inhabited areas following inland launches.

It was also the first time that a nearby final assembly and test base had been used for a Long March 11 launch, positively impacting launch preparation time and transportation costs for the mission.

CGST is one of the most prominent and well-funded of the commercial space companies to have emerged in China since a 2014 policy decision to open up the sector to private capital.

The firm secured $375 million in funding for its Jilin-1 project in November 2020 and has by far the largest Chinese commercial constellation in orbit. CGST is based in Changchun, the capital of Jilin province, for which the constellation is named.

Changguang Satellite now has 54 satellites in orbit and claims its Jilin-1 constellation can revisit any spot on Earth 17 to 20 times a day, providing more remote sensing data and product services for use in sectors including agriculture, forestry, oceans, environmental protection, urban construction, and scientific experiments.

The launches were China’s 13th and 14th of 2022, all of which have used Long March rockets developed by the China Aerospace Science and Technology Corporation (CASC).

CASC is planning more than 50 launches in 2022, including six missions to the Chinese Space Station.

Launch attempts from commercial actors including Landspace, Expace, Galactic Energy, CAS Space and more are expected to add to the activity.