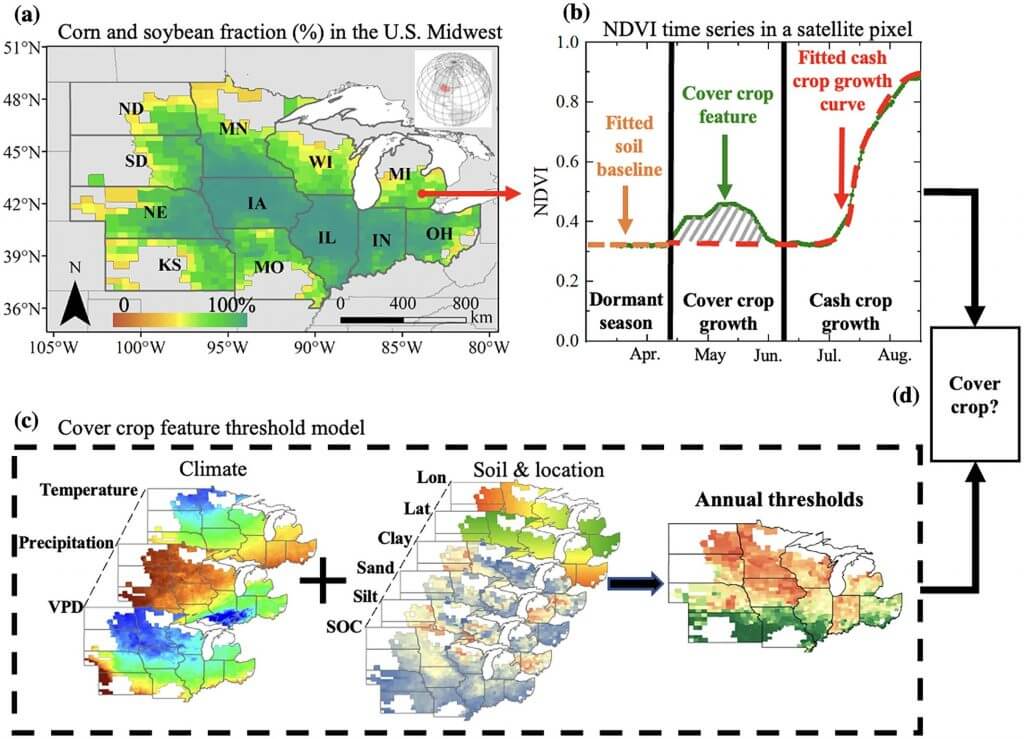 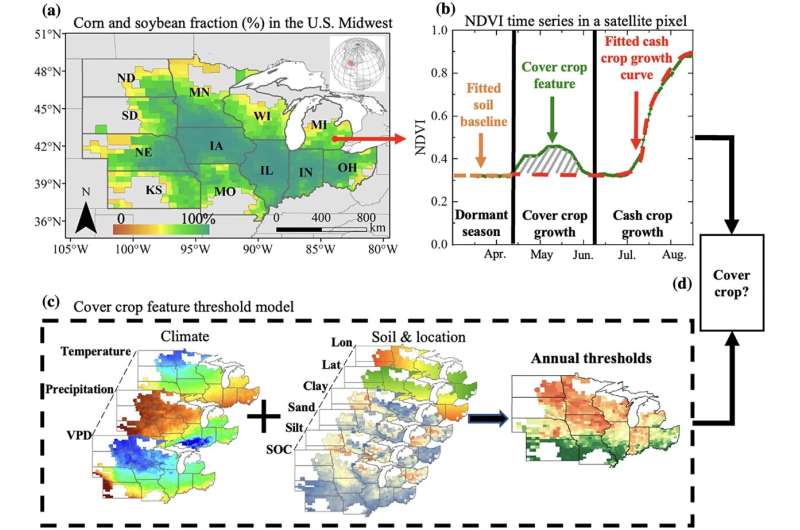 Cover crops, with their ability to reduce erosion and promote soil health, are being planted across more U.S. Midwestern land than ever. That’s according to new University of Illinois research showing that cover crop adoption reached 7.2% in 2021, up from just 1.8% a decade prior. The finding is the result of sophisticated satellite-based remote sensing efforts that accurately detected cover crops across 140 million acres of cropland and tracked their expansion over 20 years.

“It’s impossible to do field surveys for the whole Midwest. And so, remote sensing can provide a cost-effective approach for cover crop detection. We can monitor every field from the very beginning to the end of the year, giving us a clear idea of what happened over time,” says Qu Zhou, the study’s lead author and a doctoral student in the Department of Natural Resources and Environmental Sciences (NRES), part of the College of Agricultural, Consumer and Environmental Sciences at Illinois. Zhou is supervised by Kaiyu Guan, associate professor in NRES, founding director of the Agroecosystem Sustainability Center, and senior author on the study.

The uptick in cover crop adoption comes against a backdrop of increasing state and federal incentive programs, a statistically significant driver, according to the study.

“We analyzed the area of cover crops in each year with that year’s funding and we found that it’s highly correlated. We also checked the investments across different states, showing some states have higher cover crop percentages that are related to their funding investment,” says Sheng Wang, research assistant professor in NRES and study co-author.

To understand the impacts of conservation policies, the team first had to assess the extent of cover crop adoption across the region, a technical challenge. On-the-ground surveys are accurate, but are time-consuming and difficult to scale up. Previous remote-sensing-based estimates of cover crops lost ground-based accuracy in favor of greater spatial coverage. However, the majority of remote-sensing studies focused on smaller areas, such as single states, and couldn’t be reliably scaled nationwide.

In the new study, Guan’s team developed a novel algorithm to detect cover crops from space, integrating a detailed understanding of cover crop growth with machine learning and creating high-resolution maps for the entire Midwest region.

To the untrained eye, satellite vegetation data looks like a massive green blur across the landscape. Figuring out which greens actually represented cover crops was a matter of timing. The researchers developed algorithms to watch for bare soils turning green between April and May, when most cover crops are actively growing, then for soils to emerge again once cover crops were terminated and before cash crop growth began.

Once they locked on that particular pulse of green, avoiding patchy or asynchronous greening that would indicate weed growth in fields, the researchers developed dynamic thresholds to identify signals of cover crops, as their growth varies from region to region and year to year.

“We compared our satellite data with census data for 2012-2017, and validated it against field-based data from almost all the available sources we could find, including our partners, the USDA Risk Management Agency (RMA) and Indiana Department of Agriculture. So we are confident we were detecting cover crops with high fidelity in our model,” Guan says. “Every study has uncertainties, but I think this is so far the most certain answer.”

“Leveraging remote sensing and novel algorithms gives us confidence that the federal crop insurance program is being administered effectively,” says James Hipple, RMA senior physical scientist and a co-author of the study. “Additionally, it helps us better understand the impact of USDA’s efforts to support farmers who implement cover crops. In recent years, USDA has stepped up its support for this important conservation practice, including adding premium benefits for producers who plant cover crops, a new partnership with Farmers for Soil Health, increases in technical and financial assistance for cover crop adoption, and added flexibilities for haying, grazing and chopping cover crops.”

Although 7.2% adoption represents a four-fold increase since 2011, it’s still a very small percentage.

“From a policy perspective, we are overly reliant on cost-share assistance for this practice, but we do see innovation,” says co-author Jonathan Coppess, associate professor in the Department of Agricultural and Consumer Economics, also part of the College of ACES at Illinois. “For example, Illinois and Iowa have led the way using a discount in crop insurance premiums for adopting cover crops and both have proven popular at a relatively low cost. USDA experimented with it as well recently. Much more innovation in the policy is needed if we are to help transition to widespread adoption and successful management of this practice. The policies need to incorporate risk components and do more than merely cover a portion of the cost.”

Cover crops represent a potential risk in terms of the spring planting window, in which farmers must quickly terminate cover crops and get cash crop seeds planted amid increasingly challenging weather conditions. But perhaps more notably, if not managed properly, cover crops can be associated with yield penalties affecting cash crops in the following season. A recent Stanford University-led study, which relied on Guan’s satellite imagery and analysis of cover crops in the Midwest, indicated cover crops can decrease corn yield by around 5%.

“At the moment, cover cropping remains something for innovators and early adopters; it hasn’t taken hold as a common practice,” Coppess says. “A big part of the problem is that adding cover crops to the rotation is a systems change for the farmer and the fields. It adds cost, risk, and management challenges, but important learning is happening among innovators and farmers are gaining valuable experience.”

Provided by
University of Illinois at Urbana-Champaign

Citation:
Boosted by government programs, cover cropping is increasing across the US Midwest (2022, December 5)
retrieved 6 December 2022
from https://phys.org/news/2022-12-boosted-cropping-midwest.html
This document is subject to copyright. Apart from any fair dealing for the purpose of private study or research, no
part may be reproduced without the written permission. The content is provided for information purposes only.