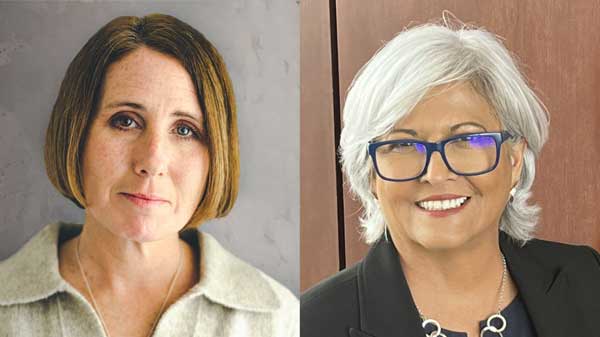 HOUSTON (Axiom Space PR) — Axiom Space is pleased to announce the hire of two executives to their leadership team: Catie Hague as Vice President of Strategic Communications, and Sandra Nelson as Vice President of Marketing. Hague recently retired from the United States Air Force as a Colonel after 25 years of service and most recently served as Director for Space Force (USSF) Public Affairs & Advisor to Chief of Space Operations, General John Raymond. Nelson joins Axiom Space after an award-winning career with Million Air Interlink, bringing nearly 30 years of experience to the growing Axiom Space brand. The two new Vice Presidents will play a vital role in supporting Axiom’s continued growth as a commercial space leader.

Col. Hague established the strategic communications function for the USSF, the first new branch of the U.S. armed services in 73 years. She developed and implemented external communications strategy and plans for the USSF to inform and educate the general public, government stakeholders, and U.S. strategic partners on the branch’s missions and purpose.

“I am excited to be joining Axiom Space as Vice President of Strategic Communications during such a critical time of growth for both the company and commercial space industry at-large. Axiom’s future space station will enable the United States to remain competitive and provide the U.S. government with unfettered access to low-Earth orbit in a time where the geopolitical landscape is changing and the space domain moves more into focus. I look forward to telling Axiom’s story and contributing to the future this team will make possible for so many around the world,” said Hague.

Hague’s experience includes critical work supporting U.S. armed forces in multiple public affairs roles worldwide, including in Turkey, for Operation Northern Watch, Afghanistan, for Operation Enduring Freedom, and Iraq, for Operation Iraqi Freedom. She also served as a NASA Fellow at the Johnson Space Center and as Commander, Air Force ROTC, at the University of Houston. At Axiom, she will report to Dr. Mary Lynne Dittmar, Axiom’s Chief Government and External Relations Officer.

“Catie is joining Axiom after a distinguished military career where she most recently guided the creation and activities of an effective and dynamic team facing a daunting task: Establishing the public face of a new branch of the U.S. armed services while advising and engaging government officials in the Legislative and Executive branches and overseas about the purpose, mission, and execution of the USSF,” said Dittmar. “As the leader in commercial space infrastructure in low Earth orbit and beyond, Axiom Space is thrilled to welcome her, and I personally look forward to her counsel and guidance as we chart a course into the future of humanity in space.”

While at Million Air Interlink, Nelson brought creative leadership and direction by implementing key differentiators that define the brand, including an engaged, positive employee culture that focused on expert safety and outstanding service. During her career, Nelson focused on building campaigns that reach untapped audiences and provided continuous strategic re-envisioning of a constantly changing market.

“I am excited to be joining Axiom Space as Vice President of Marketing at a time when the Axiom Space brand is growing rapidly and leading in the development of the low-Earth Orbit ecosystem. Axiom is already a leader in the commercial space industry and the future for both the company and the industry is bright. As we continue to tell the Axiom story both domestically and internationally, I look forward to working with the team to build a global marketing and branding program like none other in the industry,” said Nelson.

Nelson’s career is unrivaled in general aviation and her extensive experience in brand management will support the continued development of new markets and audiences for Axiom as the company aggressively grows its outreach to private and government customers. At Axiom, she will report to Tejpaul Bhatia, Axiom’s Chief Revenue Officer.

“I look forward to seeing Sandra’s visionary leadership and creativity captivate audiences on a global scale as we navigate into this new era of commercial space travel,” said Bhatia. “As a nationally recognized leader in marketing and business development, Sandra’s experience and expertise puts Axiom on a path of success when defining our brand, furthering our endeavors to connect with and reach communities around the world.”

Axiom Space is guided by the vision of a thriving home in space that benefits every human, everywhere. The leading provider of human spaceflight services and developer of human-rated space infrastructure, Axiom operates end-to-end missions to the International Space Station today, while privately building its successor, Axiom Station, the first permanent commercial destination in Earth’s orbit that will sustain human growth off the planet and bring untold benefits back home.