If there is a quintessential Silicon Valley story, it’s that of a promising start-up launching out of a garage. It’s the success story of giants like Apple, Google, Amazon and even Disney, so when Dan Katz and Tushar Prabhakar decided to quit their jobs in the summer of 2016 to launch Orbital Sidekick, they were starting down a well-traveled path.

“It’s sort of the classic Silicon Valley story,” Prabhakar admits. “We built our first payload there (the garage) that was on the ISS. The whole idea started out on a napkin at a bar.” Again, Katz and Prabhakar are in good company. J.K. Rowling penned the entire outline for her seven Harry Potter novels on a napkin. Physicist Paul Lauterbur sketched the world’s first MRI design on a napkin, and even Chicago’s grid streets were first designed on a napkin. So the launch of Orbital Sidekick, penned on a napkin, birthed in a garage, seems a fortuitous one. 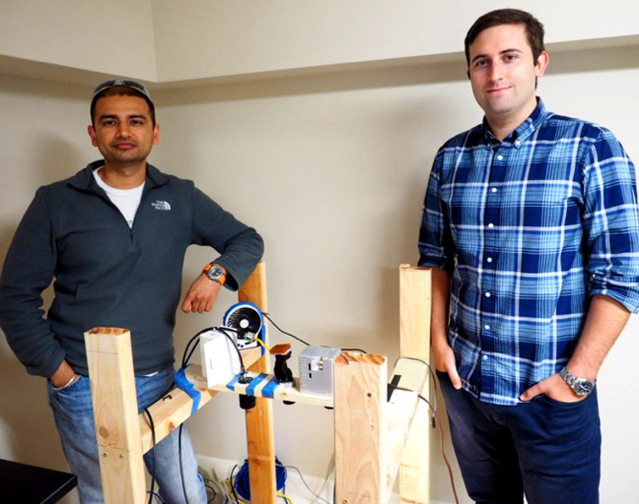 What Is Orbital Sidekick?

Prabhakar and Katz met while working at Systems Space Loral (SSL) in 2012. Within the context of that work, they noticed an increased demand for smaller satellites that could be launched more easily and be more cost effective than the large, traditional satellites typically built by companies like SSL. There were already a few start-ups doing this work and changing the nature of the satellite game.

The duo knew they wanted to jump into the small satellite industry, but first, they needed to discover a niche that would set their company apart. They landed on hyperspectral imaging. Orbital Sidekick would place small hyperspectral cameras on small satellites to give their clients a look into data never before recorded in their industry.

Light is measured in nanometers. One nanometer represents one wavelength of light, or one band of light energy. The human eye can see wavelengths that fall between 380 and 780 on the light spectrum. Hyperspectral imaging collects images from across the entire spectral system. While humans can see three colors on the RGB (Red, Green, Blue) color band, hyperspectral cameras capture hundreds of colors on the RGB band. The cameras have the capability to see wavelengths from visible light to infrared light. In short, it delivers a much more complete picture.

However, Orbital Sidekick’s goal isn’t to simply hand over all of that data to its clients. “We’re not looking to give physical hyperspectral sets to the end user because they won’t know what to do with it. If someone has the capacity then we can talk about it, but the goal for us, especially on the oil and gas side, is to provide them with actionable information.” Prabhakar is upbeat about his company’s ability to do so. Their first hyperspectral system was delivered to the International Space Station via SpaceX Dragon in July of 2018. The system operated until 2019. The next system will launch soon on a Loft Orbital satellite.

The idea behind Orbital Sidekick is cool, but it’s the end result that is the exciting part of the company. The data extracted from the hyperspectral images could save industries millions. It even has the potential to impact the fight against climate change.

Orbital Sidekick has big vision but laser focus. They’re currently operating with nine employees and have chosen to target their product to the oil and gas industry first. It’s this industry that has the potential to use hyperspectral technology to immediately save a lot of capital. Why?

The oil and gas energy spent 37 billion dollars worldwide in 2017 monitoring pipeline systems. It’s an industry that is just beginning to shift from airplane monitoring and ground inspections, which are expensive and time-consuming, to more effective and cheaper options. Here Orbital Sidekick knows it can streamline the monitoring process. “We’re looking to extract the information as you’re going over an energy asset, for example, we capture that data, we analyze it, and whatever anomalies we see, we provide the GPS location of the anomaly,” Prabhakar says.

In other words, using hyperspectral imaging, Orbital Sidekick can tell an oil company exactly where a potential leak is, degrading infrastructure and even oil and mineral detection in possible survey sites. “Here’s a GPS point, this is where we see the problem, do what you need to do,” Prabhakar says.

Once Orbital Sidekick has entered the oil and gas market, the potential for its hyperspectral imaging seems endless. Agriculture, environmental monitoring, communications and of course, defense, can all benefit. In fact, the company already holds a contract with the Air Force.

What’s On The Horizon?

In four short years, Orbital Sidekick has grown out of a garage into a viable start-up with investors who see the same potential Katz and Prabhakar do in hyperspectral imaging couple with small satellites. The company currently has a beta release version of their data app. They have their eyes set on space. “There’s no hyper spectral sensors in space now from the kind of capability that we can offer,” Prabhakar says. The first system on the ISS was 150 spectral bands between 400 and 1000 nanometers with a GSD (Ground Sampling Distance) of 30 meters. The next one going up will have more than 400 spectral bands, 400 to 2500 nanometers and 30 meter GSD.

Orbital Sidekick intends to launch three to five satellites within the next five years, giving them greater data tracking ability. Another challenge is sorting out the bottlenecks of data on the ground. Basically, the hyperspectral images return so much data, the company is streamlining what to focus on and how to deliver it to the client in its most useful form.

Fortunately, Covid-19 hasn’t really slowed down the efforts. Orbital Sidekick was already working towards remote capabilities. The research and development hasn’t been impacted. “We took a cognizant decision to put aerial flights on hold. We’ll see what happens in the next few months on keeping that program on hold,” Prabhakar says.

Whatever the end of 2020 holds, the future for Orbital Sidekick and its hyperspectral imaging system appears bright, both on the visible light spectrum and beyond.

The GRANTECAN discovers the largest cluster of galaxies known in the...

ABOUT US
Satellite News Network is one of the most trusted sources of news and analysis of the companies, agencies, technologies, and trends shaping the global space industry. Satellite News Network sets the authoritative standard for independent space journalism, astute analysis, and insightful commentary. Our website and newsletters are essential reading for some of the biggest names in space.
FOLLOW US
© Copyright 2020 Satellite News Network. All Rights Reserved.